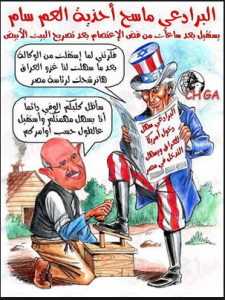 Albaradei facilitated the US invasion to Iraq, and wanted to facilitate the US interference in Egypt. he resigned at the critical time of crisis. He just turned his back to his country, because his master told him so.
Image source: Tahrir square haters on Facebook.

I’m wondering why the US media is ignoring these leaked calls recordings, whether of the spearhead of 25th of Jan or political activists or 6 of April banned movement? Is it because they consider it spying? Oops, is it because it is a violation against human rights? Or maybe because they consider it against the US morals and values, like Sheikh Hussein Barack Bin Obama claimed before?!

These call recordings concerned the National Security of Egypt, and what concerns the national security of Egypt can not at any time placed under category “personal”. When it comes to our National security, we don’t want to hear any one talking to us about human rights! As our Dear Brother David Cameron said:”human rights laws stop Britain protecting against terrorism”.

America is spying not just on their own citizens, but on the entire world and of course this is not spying, this is under category “Patriotic Act”. The States raped the right of taking any actions whether inside or outside the US against any country that can represent a threat to the US national security.

Abd Elrehim Aly said that the CNN published a personal call recording of one of the owners of American Basket ball in NBA, and it contained a sexual conversation with a woman and a racist attack against black people. If the United States of America wants Egypt to follow their example in all aspects, in order to be on the right democracy path, Uncle Sam, here we are!

In addition to Mohamed Albaradei’s call recordings with the CIA, Abd Elrehim Aly also published a report about Businessman Williams Burns, who was the invisible arm of the US in the Middle East.

Aly indicated that the US administration trusted Burns capabilities in executing their agendas and creative chaos in the Middle East, due to his behavior which didn’t raise any attention to his real role in the region.
The report added that William Burns succeeded in reaching an agreement with Iran on its Nuclear program. Burns also was in constant contacts with Muslim Brotherhood and the Egyptian State to reach a reconciliation, but when he failed in his mission, the US administration planned his retirement.

Just like Mohamed Albaradei resigned as vice president of Egypt after he failed with the same agenda, and he resigned his post after the disengagement of Muslim Brotherhood armed Sits-in in Rabaa and Nahda square. Because then, the US realized that Albaradei has no influence in Egypt and he became a burned old card.

Aly wondered why till this minute and for more than 8 month now, the US did not appoint an Ambassador in Egypt yet, after Egypt rejected the appointment of Robert Ford, the death squad expert and the Ambassador of civil wars and hell in the Middle East!

For all those who claim that these call recordings and the previous ones are fabricated, Aly said and I agree with him, if they were fabricated, how come all these noble and patriotic politicians, activists and spearhead of 25th of Jan, did not raise any case against the journalist and proved that the calls were fabricated?! Is it because they are panicking from other leaked recordings that will expose sexual dirty conversations? that the journalist also has but he said he won’t publish these calls because they are not family friendly, specially political activist Zeyad Alelemy’s calls recordings with women called Dalia and Sally!

Albaradei’s comment to these leaked calls recordings, that the guy he was talking to, is a journalist! Yes of course Brother Baradei, he is a journalist, and I’m the queen of England!