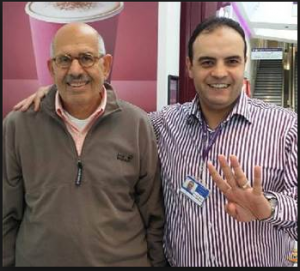 Mohamed ElBaradei is an Egyptian law scholar and diplomat, former acting Vice President of Egypt from 14 July 2013 to 14 August 2013. He was the Director General of the International Atomic Energy Agency (IAEA), an intergovernmental organization under the auspices of the United Nations, from 1997 to 2009. He and the IAEA were jointly awarded the Nobel Peace Prize in 2005.

The following call recording exposes the real Mohamed Albaradei without any masks. It also exposes suspicious contacts between ElBaradei and foreign countries representatives and the unknown role of El Baradei’s brother and relations with these representatives.

Albaradei who gave us a headache about the  “freedom of speech” and “imported Democracy from the west”, wanted to shut down a newspaper for criticizing him, and lock chief editor in jail!!! He also described the national association for change of Ahmed Maher and Ahmed Eid, 6 of April members as rubbish. Even that this association is related to him personally. This is his opinion about the youth, he is supporting, he considers them nothing but trash! He also described intellectuals, elites, political parties and the 25th revolution coalition as rubbish and low class! He also said that the 85 million Egyptians are retards and must be put in mental hospital.

Mohamed Elbaradei: Hello Aly, the Ambassador of Turkey called, not sure whether he will pay a visit to the presidency or not.

Aly Elbaradei: What did he want?

Mohamed: The important is that I’m going to meet him.

Mohamed:Yes, but I’m not going to let him meet with the national association for change, they are rubbish!

Mohamed: I want to meet him alone. Listen, he wanted that we make contact with the youth…they want to meet some youth, I told him the youth of the coalition…

Aly: We can get him Abd Elrahman Samir.

Mohamed: Yes, Abd Elrahman Samir, I will provide you with his number and you send him Abd Elrahman’s phone number.

Aly: Ok, The Spanish Ambassador called me, he said that their minister of foreign affairs is coming on the 13th. I told him that I will send him the email.

Mohamed: Yes, yes, Moritinus he is my friend. Good guy. But they take time.

Mohamed: Of course it’s a long way…these foreigners now don’t have anything to add. they are both my friends, the operation is not just out of control, but it’s also a pitch.

Aly: Good, but I mean that the Turkish guy is important, photos and stuff like this are very important.

Mohamed: Yes, the important here is that he is a minister of foreign affairs, I said both are very good.

Mohamed: Did you see Youm7 Newspaper? I don’t know what they wrote about me, but the boys insulted and attacked them back.

Aly: Yes, they insulted and attacked them.

Mohamed: They published that I said that Shafiq’s government must be changed and that I only care for my own interests and not the country’s interests.

Aly: They are son of bitches!

Mohamed: In the same piece of news they published, possible new president like Ganzoury, they mixed up things.

Aly: Are they Intelligence? I don’t understand.

Mohamed: Yes, they are intelligence of the old regime…This newspaper must be shutdown, it must be closed. Chief Editor should be put in jail. Listen I want the boys and Ziyad to go with the turkish tomorrow.

Call recording between Mohamed Elbaradei and Ibrahim El Moallem, he is a  Muslim Brotherhood media marketer (the Chairman and founder of Shorouk Group of companies including Shorouk newspaper). In this call Mohamed Elbaradei asked Ibrahim El Moallem, to take permission first from Khairat Alshater on some amendments on the Muslim Brothers dark ages constitution of year 2012. ( Khairat Elshater is the second man in the Muslim Brotherhood terrorist organization) who didn’t have any official authority in the country to take any type of decisions that concern Egypt.

This call also confirms that , Mohamed Morsi was not the president of Egypt, and it was Khairat Alshater and Muslim Brotherhood headquarter in Cairo that was making all decisions, and was ruling the country.

Mohamed Elbardei asked Ibrahim El Moallem, that he wanted to amend some articles in the constitution but he wanted to ask first, for the permission of Khairat Alshater whether he agrees on these amendments or not! This is a real example of all these mercenaries who were playing with our constitution, future and destiny.

Another call recording between Mustafa Alnagar political activist and was a member in Albardei’s campaign for presidency and Hisham Mursy the chairman of the Qatari Academic for change and he is also married to Alqaradawy’s daughter (Alqaradawy is a Muslim brotherhood cleric). The call also involved Ahmed Shukry the manager of Albaradei’s campaign for previous presidency elections. This call exposed the foreign funds they were receiving from Qatar to support the Creative Chaos project in the Middle East of the USA and the big amounts of money paid to create as much chaos as possible to cause damages to the national security of Egypt and bring down the state’s institutions.

They were surprised about the big amounts of money that will be transferred to their personal banks accounts from Qatar. In the meantime, Mustafa Alnagar was angry that one of the guys who was working on marketing their Chaos (his name is Shady), was going to have more money comparing to what they were supposed to receive. He told the chairman of the Qatari Academic for change, that they have the priority to take this money and not others. And he will recalculate the whole issue and send it back to him for reconsideration. Ahmed Shukry replied to Alnagar not to worry and he will receive the money on Monday!

This strange mix: Mohamed Albaradei, his campaign and his youth coalition and Qatar and Muslim Brotherhood. No wonder Albaradei was against the disengagement of Rabaa’s Muslim Brotherhood armed sit in, and he resigned as a vice president, after his big failures in achieving the creative chaos goals of his Master Obama!