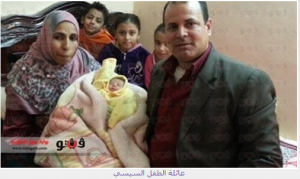 According to Veto Gate Newspaper dated 30/4/2014, Muslim Brotherhood Doctor works in the medical center of Quessna City in Monofia Governorate, refused to provide subsidized milk to a 4 month old baby, who was seriously sick because of malnutrition due to milk shortage.

Aldossuky, the father of the baby said that he called his baby “Alsisi”, due to his admiration and respect to the former minister of defense, Marshal  Abd Elfatah AlSisi.

Doctor Hana Soror, undersecretary of the Health ministry in Monofia city declared that the Muslim Brotherhood doctor is under investigations now and after investigations are over and he is proven guilty, he will be fired immediately.