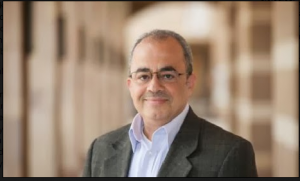 Emad El-Din Shahin Egyptian professor of public policy at the American University in Cairo’s school of global affairs and public policy; and editor-in-chief of The Oxford Encyclopedia of Islam and Politics. He is currently a Public Policy Scholar at Woodrow Wilson Center.

I’m not against the freedom of speech and I certainly not against any one criticizing the Egyptian government or the armed forces when they commit mistakes, because our duty as citizens is to criticize what we think is wrong and negative in our country and in the meantime, we provide solutions for our problems, crisis  and to learn from our previous mistakes.

There is a big difference between criticizing your country because you are keen to participate in reforms and inciting against your country and deliberately smearing the reputation of your armed forces and in addition, you are supporting a terrorist organization and challenging the will of more than 33 million Egyptians and you are calling 30/6  a “Military Coup”. 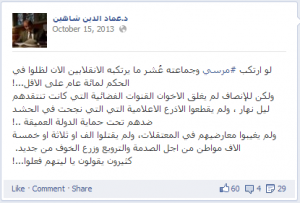 Mr. Shahin is against the 30th of June revolution and claimed that it was a “Military Coup“. He described the Armed forces as “gangs” ruling Egypt and he is supporting the legitimacy of Mohamed Mursi and the Muslim Brothers. He mentioned that the Muslim Brotherhood did not commit any crimes in Egypt during their one year ruling, but the armed forces did.

He claimed in his article on the guardian and posted on his facebook account that Egypt is ruled by the Armed forces and became a police state torturing, jailing, raping and killing citizens. Thus, he urged the International community to strongly interfere in the Egyptian internal affairs and alienates the west and the States against Egypt and incited on dismantling the Egyptian armed forces and the police. 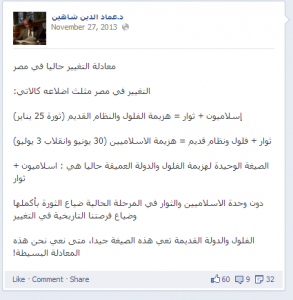 He also incited the International community against Egypt in order to release all prisoners including Muslim brotherhood leaders and members. In addition, he accused Egypt’s Prime Minister Ibrahim Mahlab and Marshal Sisi of being corrupted and senior members of Mubarak’s regime.

Furthermore, on his facebook account, the timeline is full of offends and inciting against the official institutions of the Egyptian 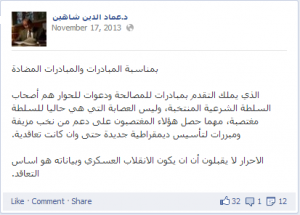 State and the Egyptian people. Despite that he denied his relation to Muslim Brotherhood, he is a big supporter of Muslim Brotherhood terrorist organization and called for the necessity of reconciliation with the MB and their participation in political life. So, I guess he is not a brotherhood member or leader but he just respects them! 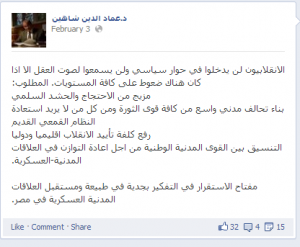 Mr. Shahin incites Egyptian youth to fight the Armed forces and to liberate Egypt from the Egyptian military institution.

Shahin claimed that MB Rabaa sit- in was not armed and the weapons found in the square during the disengagement were placed in the square deliberately by the obscene Egyptian police and it’s a trumped-up charges against the Muslim Brotherhood members and supporters.

He stated that in order to correct the path of Egypt’s democracy, the youth of the revolution must get into coalition with Islamist Groups against the Egyptian armed forces and against all institutions in Egypt. 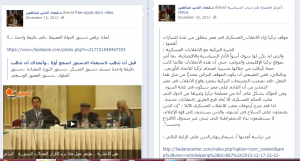 All what Mr. Shahin stated whether in his article or on his facebook account has nothing to do with criticizing or freedom of speech, but it has everything to do with him being nothing but a quisling. He has no proof or evidence in all his blatant lies accusations against the Egyptian state, but his own words!

I really tried hard to find any positive thing or one poor single fact or evidence in all what Mr. Shahin wrote about Egypt, but unfortunately, I stumbled in his rankness garbage. Mr. Shahin talked about Egypt and gave the impression to his readers that he is a victim, innocent and represents Egyptians, Idealism, national revolutionary, morals and patriotism. He is an individual who represents the truth and he considers at least 33 million Egyptian who participated in 30/6 and about 20 million Egyptian who voted on 2013 constitution are nothing but corrupted obscene citizens who support the armed forces and for this reason he considered them traitors to the legitimacy of Muslim Brotherhood.

Reading all what he wrote, sounded exactly like reading NYT or Washington Post or Al-Jazeera fabricated news about Egypt, or the US working group against Egypt. I can understand the motives of an enemy attacking my country or smearing the reputation of Egypt or the armed forces, but I totally refuse to understand the betrayal of an Egyptian citizen to his own country and people, specially at this critical period while Egypt is fighting terrorism, but Mr. Shahin sees MB as victims and innocents. 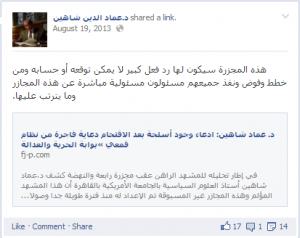 I wonder if the desire of Mr. Shahin became true one day, and the youth of Egypt gets into coalition with Islamist groups or the international community managed somehow to dismantled the Egyptian armed forces and police institutions, who will protect Egypt national security and borders? Who will protect Mr. Shahin and his family? The Muslim Brotherhood Militias, Hamas, Al Qaeda or the Nato? If Mr. Shahin would like to dismantle the Egyptian military, why doesn’t he go and volunteer in Syria and fight to the side of his brothers of Al Qaeda and Nusra Groups?

I wonder what Professor Shahin is teaching his students in the AUC? To become armed freedom fighters against the Armed forces? To reach what goal? Breaking the state’s institutions? for who’s favor? Who would benefit from dismantling the armed forces, but Egypt’s enemies!? Is this what the AUC pays Mr. Shahin to teach to his students?!

I really would like to ask Mr. Shahin who lectured us about the real patriotism which is from his own point of view, to become enemies against our armed forces, what has he done for his country and people, except spreading lies and hatred, inciting for violence, supporting terrorism and alienates the west against Egypt?!

Perhaps Mr. Shahin can explain to us if what he stated is not treason to Egypt and betrayal to all the Egyptian martyrs blood who lost their lives on the hands of his favorites MB terrorists, what is it then!? Hidden Camera!

You are right Mr. Shahin, Muslim Brotherhood did not commit any crime in Egypt, all crimes and accusations against your Muslim Brothers and sisters are trumped-up charges by the obscene nasty entire Egyptian society like you mentioned.

The truth according to Professor Emad Eldin Shahin’s chronic squint eyes is:

The armed forces and the police are killing each others and bombing their own buildings and committing suicidal attacks against themselves; The Egyptian Citizens are torturing and killing themselves and each other; The Christians are burning their own churches, homes and shooting at each other; The judiciary authority are all corrupted and blind and don’t see the truth with your squint eyes; Tourists traveled to Egypt in particular, to commit mass suicide to embrace the curse of the Pharaohs; Egyptian Medias are suffering from mad cow disease and spongy degeneration in their brains and they are attacking Muslim Brotherhood for no reason but pure madness.

90 million Egyptian are under Hypnosis and they are too shy and naive, they cannot demonstrate or fight this police state that you described, they dare not demonstrate or to show their support to your Muslim brothers the symbol of innocence. We are all being raped, tortured and getting killed daily by the armed forces green men and the dotted purple police  who are smashing us with their grey flying tanks due to the spread of swine flu in Egypt!

The saddest thing about betrayal is that it comes from Egyptians and not from the outsiders. Mr. Shahin you are a disgrace and I’m ashamed of you, you are a bad image to the country. How much is your heart filled with hatred towards the Egyptian military?! If you hate them this much, why do you still enjoy security and safety under their shadow? The blood of an Egyptian military soldier is so precious that I personally don’t accept that he sacrifices his own life  to protect a guy like you. I’ll tell you what, next time a thief or a terrorist attacks you, don’t you dare calling the local number of police or military rescue, a bad image like you ain’t worth one single blood of our military brave soldiers.