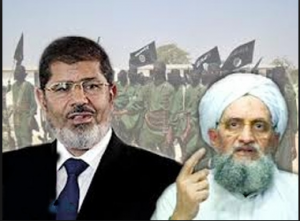 responsibility in creating a climate of violence. Many of the terrorists and thugs elements committed terror attacks after 30/6/2013, were among Morsi’s presidential pardon list and were given a presidential pardon by Mohamed Mursi when he was in power.

Mohamed Morsi hijacked legislative and executive powers and authorities, and gave himself immunity against any questioning. Mursi’s authorities were actually blatant violations and above the law and the constitution.

Mohamed Mursi issued 7 exceptional presidential pardon resolutions during 5 month from mid July 2012 to 1st of Jan 2013 and all resolutions were published in special edition and not the weekly normal edition, as the law states: Source Almasry Alyoum

I’m dedicating this post to all International human rights organizations and the foreign press who claim that Mohamed Mursi’s trials are framed and revenge launched by the Egyptian government. This is a physical evidence. This is the direct link of Mohamed Mursi to terror acts happening in Egypt. I want the human rights organizations and the lawyers who defend Mohamed Mursi and claim that he is innocent, to forget about all his others crimes, and read this one, and count to me how many crimes and law violations did Mohamed Mursi commit per this presidential pardon, if they have the courage and the honesty to declare it!

Can Obama’s administration or any authority in the United States issue a general pardon or presidential pardon to terrorists and assassins or drug dealers?! Obama said many times “Yes we can”, I don’t think he can say Yes we can to this one!!! But, no matter what we say or present of evidences to make the world see the ugly truth of Muslim Brotherhood, the world is deliberately living in a total denial status and I wonder why!!!???

Morsi pardoned prisoners on the occasion of the holy month of Ramadan, July 19, 2012, after only 19 days of taking office on June 30 of the same year. The pardon included 588 prisoners , including Palestinians were accused in a number of cases, most notably the arms and ammunition, weapons theft, including 487 accused of possessing and making firearm, and 29 accused of possessing white weapons.

16 accused of the trade of weapons and ammunition, and 17 accused in robbery cases, and 10 accused of acts of terror and violence, and 5 accused of sabotage and deliberate destruction, and 24 defendants in a variety of crimes, including drug trafficking.

The presidential resolution also included an exemption from the original sentence, or what remains of it. Mursi’s pardon covered also the original sentence for 49 prisoners, unless they were sentenced of other issues.
In addition his resolution reduced the punishment for 16 people from death to prison and also covered the reduce of many years in jail to less years sentences. List of names who benefited from this reduce penalty and their original charges:

Ahmed Ragab Mahmoud Shlob , Palestinian nationality, was accused of drug trafficking, and a member in active cell in the smuggling of weapons into Sinai during the month of June 2011. The original sentence reduced from sentence for life in prison to seven years.

All 26 belonged to Muslim Brotherhood International Organization, accused of national security threats, assassinated police officers, terror acts and terrorizing the society. The original sentence was life prison and death sentences for some.

Among the 26 who received pardoned (23 were pardoned from the original crimes or what remains of it, names and charges as follows:

Alsayed Saber Khatab charged of murder in the violent event of Iman Mosque in Suez City and had 15 years in prison.

Ahmed Mahmoud Hamam, accused of participated in the failed attempt of assassination Mubarak and had life sentence.

Attia Abd Elsamie Mahmoud also participated in the violent event of Iman Mosque in Suez City and he had life sentence.

Shawky Salama Mustafa Attia, charged in the case of “the returnees from Albania”. Had sentence for life.

Mohamed Mohamed Hassan participated in criminal acts and incitements for crimes and had 3 years in prison.

Mohamed Yussry Yassin, violated the implementation of constitution provisions and charged of bombings Alazhar area in year 2000, had 10 years in jail.

Shehta fawzy abu treka, charged of forging governmental official stamps and theft of 7 million Egyptian pounds from the ministry of interior account, and accused of fraud. Had 10 years in prison.

Abd Elhamid Ossman Mussa Omran, nick name “: Ossman Abu Akrab”, charged of killing crime and had life sentence and he was also condemned before of killing Sherin Fahmy police general in Assiut city security and others also were accused with Abu Akrab of weapons and ammunition theft from the Assiut security directorate.

Alsayed Abu Alnaga Alsaftawy violated the implementation of constitution provisions and had 15 years in prison.

Mohamed Mohamed Ismail Khalil accused of joining a banned group, and the attempt of assassination of Mubarak, and was sentenced to 15 years in prison.

Ashraf Mohammed Abdel Halim, accused of joining a secret terror organization and committed terror acts, he had two sentences, sentence for life and sentence to death.

Famous preacher Wagdy Abdel Hamid Mohamed Ghoneim, was deported from Bahrain in 2008 for security reasons and was forced to leave England and prevented from entering UK on charges of incitement to terrorism.

Awad Mohamed Saad Al Qarni, Saudi famous Preacher sentenced to prison in money laundry and the financing of terrorist group with the volume of money four million British sterling and 2 million and 800 Euros.

Aly Ghalib Mahmoud Himmat, one of the leaders of the Muslim Brotherhood in Syria, and Youssef Mustafa Nada His famous nick name Youssef Nada, former commissioner for international relations of Brotherhood Organization, he is also known of “the Brotherhood’s bank” accused in the assassination attempt of Late President Gamal Abdel Nasser, in mansheya in Alexandria in 1954, and accused of supporting terrorism in 2001, and was sentenced for to 10 years imprisonment.

Ibrahim Farouk Mohamed El Zayat, Finance Minister of the Muslim Brotherhood in Europe, and one of the leaders of the MB International organization from German Egyptian origin. And Yusuf Tawfik Ali Yusuf Almtaish, and Fathi Ahmed Hassan Kholy , one of the MB group’s leaders in Qaliubia city

Shaaban Aly Abd Elghani Hareedy had death sentence and the sentence was replaced to serve 15 years in prison, in the case of the attack on a bank in Ayat in Giza, and the murder of a police officer.

Morsi pardoned 57 convicted of sabotage and disruption of transportation and theft and drugs, forgery, fraud. Corruption, damaging public and private properties. Mursi issued this resolution without any reason or national or a religious occasion that requires any presidential pardon!

Mahmoud Salem Abdullah was convicted of possessing a weapon without a license – Mustafa Darwish Muhammad convicted of attempted theft 3 years in prison.

Taha Mohamed Abdel Hadi been sentenced to 5 years in theft case – Hassan Ramadan 10 years in prison for possession of weapon without a license.

Mustafa Ahmed accused in theft case and was still under investigation but he got full presidential pardon – Sameh Mandour sentenced to 3 years in prison in possession of a weapon without a license – Mekky Mohammed Saleh charged in the case of drug trade had 3 years in prison.

Mohammed Ahmed Mohamed Metwally has been sentenced to six months imprisonment in a case of sabotage.

Hisham Mohammed Hawari, theft, and was under investigation and got presidential pardon.

Both 4th and 5th resolutions, Mohamed Morsi pardoned 123 Sudanese involved in 25 military lawsuits, in return of releasing the journalist Shaimai Adel, which was really a farce show:

16/7/2012, during Morsi’s visit to Ethiopia accompanied by the journalist of Alwatan news Shaimai Adel, she was held in Sudan for two weeks. Morsi declared that he settled the issue with Omar Bashir and released the journalist.

After a short period, the two presidential decrees were issued by Mohamed Mursi to release 123 Sudanese who were charged of: money laundry, forgery and theft, possession of weapons and ammunition and smuggling weapons through the borders and illegal immigration.

Morsi ignored the serious charges against these Sudanese and released them. Morsi received Omar Bashir in the presidential palace and Bashir left with 123 Sudanese criminals back to Sudan!

Mursi gave Egyptian identities to more than 3000 Palestinians. This is another violation to the Arab League resolution issued on 1959 approved and signed by Egypt, not to give a different nationality to Palestinians to  maintain the Palestinian identity in order to guarantee their right in returning to their homeland.