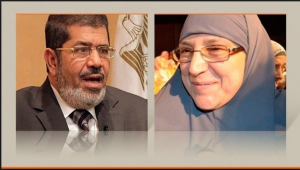 In an interview with Turkey’s Anatolia news agency Mursi’s wife Naglaa Mahmoud said, “I have between my fingers, a treasure trove of secrets from the White House and Mrs. Clinton fears my wrath.” She said, “I will not speak about Huma Abedin”. When asked if she had a close relationship with Hillary Clinton, she said, “When my husband returns from his kidnapping, the one who led the coup will pay a hefty price.” Of Mrs. Clinton, she said, we were recruited by the Clintons from the U.S. “We have a long friendship of many years and it began in 1980. We lived in the U.S. and my children learned there. This friendship increased further when my husband became the legitimate president of the country.”

When asked if they still have friendships with each other, she said communications never ceased and that the conversations are all recorded. The wife of Mursi divulged that Mrs. Clinton seeks the assistance – both official and unofficial – of several members of the Muslim Sisterhood organization to help with problems in the Middle East. “We also have routine business dealings with the Clintons.”

Mahmoud further stated that “Hillary depends on us tremendously to help her succeed in the coming presidential elections, just as we helped Barack Obama win twice.”

What have been published and translated by Walid Shobat match with Omar Suleiman Egyptian Former Chief of Intelligence documentations on the espionage case between Muslim Brotherhood, Mohamed Mursi and Foreign Intelligence including the CIA during the 25th of Jan 2011 events.