Alwatan Newspaper published declarations obtained from Mohamed Morsi from inside Burg Al Arab prison on 7/1/2014, one day earlier to his trial on 8/1/2014, Morsi and other Muslim Brothers leaders face charges of killing protesters on 5/12/2013 in front Al-Etihadeya Presidential Palace.

In addition, Mohamed Morsi and other Muslim Brotherhood leaders are facing serious charges of treason and espionage with foreign countries and foreign intelligence elements during the 25th Jan 2011, which will be held on 28/1/2014. 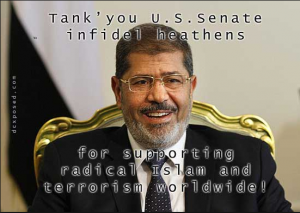 I’m the legitimate president of Egypt, I will reveal amazing secrets to the world if those who turned against me insist on putting me on trial for the espionage case.

I will ask for the testimony of former minister of defense and his former chief of staff. I’m not going to hire a lawyer and I’m not going to admit this trial. This is a conspiracy against me and I assure those who are involved in it, that there are many foreign superior countries will exert severe pressures on Cairo to stop this trial under any circumstances! If this trial will be held against me, I’m going to expose all parties involved in this case.

Alwatan News added that totally the opposite to his first declaration, Morsi backed away on his first statement, then asked to start negotiations with former Military Council which will satisfy all parties involved.

[symple_testimonial by=”Morsi said”]Morsi declared that in case the Military council don’t agree on these negotiations, everybody will lose, and events happening now in Egypt will escalate. I demand to negotiate with former Minister of Defense and his former chief of staff to confront them with issues related to the Presidential elections.[/symple_testimonial]