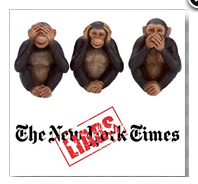 Constant fierce attacks by foreign medias against Egypt is taking place since  30/6 Egyptian uprising, especially New York Times who deploy all their reporters in Egypt and Editorial board in misleading their readers by publishing narrative faked stories instead of facts!

New York Times is promoting sympathy for Muslim Brothers Terrorists and hostility for more than 33 million Egyptian’s will!

The politicized NYT fierce supporter of Terrorism in Egypt, published an article on 6/1/2014  titled “Don’t Create a New Al Qaeda”, relating what is happening right now in Egypt to the 9/11 terror attacks against the US and putting the blame on the Egyptian people’s uprising against Muslim Brothers Regime!

The article of New York Times written by  DANIEL BENJAMIN and STEVEN SIMON, aggressively attacked the 30/6 Egyptian revolution and accused the Egyptian Military of committing a serious mistake when they decided to protect more than 33 million Egyptian’s will in overthrowing a Fascist terrorist regime!

New York Times is not only insulting and challenging Egyptian’s free will, but they also undermine the mass protests all over the country from 21/6 till 3/7/2013. Let me remind NYT that Egypt would have turned to another Syria, if the military decided to stay neutral and not only a civil war was going to spread in the whole country, but the Egyptian Army would split and get divided just like the Syrian Army did. But I guess that’s what the US and European leaders and their politicized News agencies wanted in the first place!

The article have put the blame on Egypt in fighting terrorism, which they considered a serious threat to the US and the western countries!

New York Times claimed that European and US leaders only used a few tools to influence the Egyptian Military’s decision making because the conflict appears to be an internal one! Really? The US and European leaders tried all kinds of pressures against Egypt to make the state kneel to their demands to release a regime who committed serious crimes against humanity and espionage with foreign elements, terrorist groups and foreign intelligence! US thought that cutting the military Aid will make Egypt kneel and ask for forgiveness from the master of the World! US punished more than 33 million Egyptians for choosing to live with dignity and saving Egypt from turning to another Iran!

At the last paragraph of the NYT article, it stated that America must do its best to ensure that those outside Egypt who remember the cycle of repression and radicalization that paved the way to 9/11 regularly remind those inside Egypt who appear determined to forget it!

So strange that this NYT article hasn’t mentioned a word about Al Qaeda in Libya, Syria and Iraq and who was the main player in planting terrorism in these countries! Instead of calling spade a spade, The article addressed a direct accusation to Egyptians because they have chosen to liberate their country from a terrorist organization and refused that their country get hijacked by fascist regime like the Iranian one!

Who planted Al Qaeda in Iraq, Syria and Libya? Who paved the way for the 9/11 attacks against the US? Who is doing the same stupid mistake now?

The main reason of 9/11 attacks was hatred against the US policy in the Middle East region. If the creation of Al Qaeda and any other terrorists groups was due to oppression in the Arab countries, why did Al Qaeda attack the US inside their homeland, while it was easier to address these attacks to any Arab country including Egypt!

The US support Israel in all their massacres against the Palestinian people. NYT read history!

The US invaded Iraq based on a big lie of WMD and the trial of Saddam Hussein was really a farce! He was condemned to death based on one case crime, while other specific crimes were totally ignored because it involved the US and the Iraqi regime alliance when Saddam was an ally and not an enemy. Saddam’s capture and trial was a direct message by the United States to the rest of the Arab countries, that YOU ARE NEXT! NYT read history!

The US established military bases in many Arab countries and used these bases as a starting attacking point to implement the new creative chaos project in the Middle East, if not through internal uprising and conflicts, then military attacks can be launched whenever it is necessary.

Who created Taliban and Osama Bin Laden? The US had a coalition with these terrorist groups against the Russians. They were not terrorists then, they were US allies. Then when the part of mutual interests was gone, US declared Taliban and Bin Laden as terrorists and enemies! You are either with us or against us!

The US managed very successfully in planting hatred in the hearts of the Arab world and especially Egyptians against the US Policy and this hatred will never stop as long as US continue to control the wealth of Arab countries and the US barefaced interference in our own internal affairs which all against our own will.

Who is working on destroying any steps for new democracies, stability and development? What does history say in this regard?

It was never an interest to the US to support any new democracies in many countries in the world. US was a main player in Iran, Iraq, Syria, Yemen, Libya, Tunis, Indonesia, Vietnam, Nigeria, Guatemala, Chile, Salvador, Nicaragua, Angola, Mozambique, Cuba and Korea. All these countries had a movement towards new democracy, the US didn’t want it to see the light…NYT read history and address your accusations to the one who is spreading terrorism, instead of addressing it to Egypt who is fighting terrorism sponsored and financed by the Obama’s administration.

New York Times is deliberately ignorant about history or deliberately biased to terrorism!  In my opinion, I believe they are both cases beside fabricating narratives stories.

Muslim Brotherhood Organization did not want to participate in political life since its creation. Muslim Brotherhood wanted to build an Islamic empire based on the Brotherhoodization of all countries they manage to takeover. NYT read history instead of forging it!

Muslim Brothers went under ground since their organization was created, not because the previous regimes oppressed them, but because they wanted to hijack a whole country by terrorizing people! Muslim Brothers never wanted to be political partners in any country they are in, but they want to be the sole rulers and rule based on their Brotherhoodization terms.

Who is really a serious threat to US and European countries? Is it Egypt who saved the world from pure Black terror and fighting a fierce war against terrorism?

When Egypt was fighting terrorism during the 80s and the 90s, US and the western countries were giving visas permits to terrorists under the cover of human rights and freedom of speech. US and European countries and their big lie and fake cover of Human rights organizations used to claim that Egypt is oppressing the freedom of speech of the regime opponents! The Islamist in Egypt despite their different symbols and ideas, they all have one thing in common, change the whole country by terrorizing and force! NYT read the Egyptian history maybe you will learn something useful, which I doubt so much!

New York Times can get back to Osama Bin Laden addressed message to Americans after 9/11, he didn’t mention that Al Qaeda attacked the US because of the Oppression Islamist confronted in their own countries. He talked mainly about the US tyranny in the Arab World! I do not accept any reason in justifying terror acts against innocent people anywhere in this world, but I’m asking NYT to stop even forging history and facts!

If terrorists attacks were launched against the US in 9/11 because Islamist were oppressed by their own regimes, then I guess terrorists groups like Al Qaeda have serious squint disease!

If the US and European leaders really want to live in peace and get rid of terrorism, there is only one way to it in this regard:

Stop interfering in our internal affairs!


Stop the US and European double standard towards our countries, just because every time we take a step forward doesn’t suit your own interests means that you have the right to drag us backwards and challenge our free will!

Stop lecturing 87 million Egyptian, our government and one of the biggest army’s in the world on how to direct our country to real democracy, because US is the last country on earth to talk about what Democracy really is!

Stop spreading lies about military coup in Egypt. The Egyptian Military did not revolt against Muslim Brothers, but more than 33 million Egyptians did! The military did their part right and stayed neutral and did not interfere in political life after they delivered the authority to the Muslim Brothers who won the presidential elections by deceiving, terrorizing and forgery!

Stop giving visas permits to terrorists under the cover of human rights because I’m telling you, it is too late now. These Extremists you are supporting will explode in your face one day soon and you won’t even realize it!

Stop this fierce campaign against Egyptian people, because you will never know what kind of hatred and anger is growing inside our hearts against all of you who support the terrorists who are killing us daily.

Stop News fabrication and misleading your readers because soon the whole world will learn about what kind of dirty deals were going on between the US and Muslim Brothers terrorists. US administration and many foreign intelligence out there will be exposed in front of their public opinion and maybe this is the right time so justice will take place against all foreign leaders who betrayed and misled their own people and got in ally with black terrorism!

Stop inciting and participating in your failed attempts in destroying the Egyptian Military, the only Army force left in the whole Middle East Area! US Stop claiming that you support Egyptians choices and free will, this claim really make us feel sick, because this is a barefaced big fate lie! US is challenging Egyptians will because 30/6 was a big slap on the Obama’s administration face that destroyed and smashed their Creative chaos project that Egypt managed and succeeded to escape from it and saved the whole region and the world from pure black terror called Muslim Brotherhood Organization!

Nothing will stop Egyptians from finishing what they have started on 30/6/2013 and the last message I’m addressing to all those who support terrorism in Egypt, Who sow seeds of Terrorism will not just harvest hatred, but will pay a very precious high price when this pure Evil will blow up in your faces.

Source of information used in this article: Smith, J. W. Why? The Deeper History Behind the September 11th Terrorist Attacks on America.