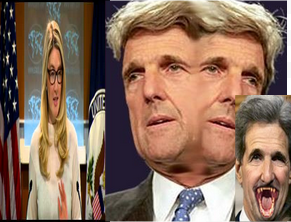 On the 25th of March 2014, Marie Harf threatened Egypt of serious consequences of cutting future aid, in case Egypt execute the death penalty verdict on 528 Muslim Brotherhood members issued by the Egyptian court.

Marie Harf also condemned the trial of the Muslim Brotherhood chief Mohamed Badie and 682 others which she described as not according to essentials justice standards. Harf declared that such horrible and illogical acts of Egypt will force the US to make decisions in relation to cutting completely Egypt Aid in the future.

On the other hand, John kerry gave direct orders to Egypt to cancel the verdict of the death penalty issued against the Muslim Brotherhood. He expressed his worries and the sudden court verdict, which in his opinion challenge logic.

Harf and Kerry, how about a big cup of shut the hell up! Egypt in an independent country ruled by the Egyptian constitution and by the power of independent judiciary authority of law and not ruled by the US impertinent interference in our internal affairs.

US foreign affairs spokeswoman talking about essentials justice standards, really makes me sick! You guys are lecturing Egyptians about justice and essential standards?! I will respond to this barefaced statement of yours like Sisi former Egyptian minister of defense declared on 26/3/2014:”It is time for this disrespect and this intrusion to stop. This is an esteemed country and everyone must know that this is a decisive moment … that disrespecting Egypt is an adventure with consequences … that Egypt is not a playground for any internal, regional or international party … and will never be.

US government the violaters of human rights condemned and threatened Egypt the land of free people who decided to get rid of fascism and terrorism and refused to live like slaves, is lecturing and warning Egypt about the future US Aid!? Marie Harf and Kerry you can take your Aid and shit it in the toilet. Who told you that Egyptians can be threatened with your peanuts aid?!

Only Egyptian citizens have the right to interfere in their internal affairs. You guys have enough mess and crisis in your own country that need your attention, or are you deliberately distracting your own public opinion with not of your damn business foreign affairs, so they shut their mouth about your big failures in running a country like the States!?

US condemned Egypt because we are applying justice on terrorists and criminals. You are telling Egypt to release 528 Muslim Brothers criminals who tortured and killed the deputy of Matay police station, distorted his body while he was dying?

You talk about justice standards and ignored one of the convicted in this massacre is a Muslim Brotherhood doctor who participated in killing the deputy by deliberately left him to bleed to death, removed the solutions from his arms and hit him with a gas cylinder in the emergency reception?

You are supporting Muslim Brothers terrorists and killers by nature who didn’t have mercy with a dying man and tried to torture him while dying?! You are defending and telling us to release terrorists who shot and killed 16 others policemen and 4 officers in the same police station, and released arrested convicted prisoners from the police station , broke into the armory, stole police weapons and later in the same day attacked the hospital where the injured policemen were hospitalized so that witnesses would be eliminated?!! Who else would you support except terrorists and killers, you human rights enemies! (Doctor Aly Hassan Ibrahim, Muslim Brotherhood doctor worked in general hospital of Matay, 35 years old participated in killing the police deputy of Matay).

This is not all they have committed of massacres and crimes, in addition and in the same case, those 528 terrorists burned the general office of the governorate in Matay, they stopped ambulances and fire trucks from reaching the place to control the fire and rescue injured citizens.
They also attacked and burned churches and public and private properties like School Jesuit priests and nuns, burned private shops of Christians in Alhusseiny alkebly street, attacked Third Apostolic Church, destroyed the medical center and burned two tourists boats “Alzahabeya” and “Iskander”.

Killing one soul is like killing the entire humanity, you representatives of immorality and political whoredom in the Obama Bin lying administration!

This is a video showing the deputy while he was dying, and Muslim Brothers who got convicted of torture, killing trying to distort the body of a dying man, feel free to translate it to English and hear them saying that they want to make sure he was dead and wanted to piss on him and torture his body to make sure that he is dead. What kind of pure evil and devils are you guys supporting?!

The following video shows another police officer of the police station in Minia Matay, getting dragged in the street, tortured  by Muslim Brotherhood (Officer Karmi Fouad). This video is just showing how a bunch of wild animals gathered on one man, just for the enjoyment of torturing

Actually death penalty against those terrorists is a mercy, Harf and Kerry should instead thank the judge for the death penalty, at least they will be asked before they get hanged for their last wish. They didn’t ask their victims for any wishes before killing them. They will be hanged only once, they did kill their victims slowly by torturing them and didn’t have any respect or any mercy to a dying man or even a dead body. They will be buried after they will be hanged, no one will distort their bodies, Muslim Brothers are killers and terrorists by nature.

John Kerry and Marry Harf, it’s better to shut up and give the impression that you are stupied, than to say something and erase all doubt!