We are the Egyptian signatories of this message, Proud of being citizens of such wonderful, great 7000 years old civilized country. Egypt has a great civilization and history, that we really doubt you have ever read or learned about it. Otherwise, you wouldn’t underrated and underestimated the Egyptian Pharaohs capabilities and abilities.

Obama, you are so ignorant and know absolutely nothing about the determination of the Egyptian people all over their history! If you did not have time to read or learn, we would like to inform you that the Great Egyptian Nation is writing its modern history since the 30th of June 2013 revolution, till this minute we speak, and we intend to move forward till we reach our goals. The only way for you and for your administration to find out about Egyptian people’s strong will and free choices, is to watch our news on TV.

We are against your constant support to the Muslim Brotherhood against the will of the majority of Egyptians. Therefore, we are encouraging you to STEP BACK and STOP. We really had enough of your double standards dirty policy.

This is our message to you and to your politicized US media and the working US groups against Egypt, who don’t know the difference between freedom of speech and spreading fabricated stories about our country and people on a daily basis, which don’t serve but terrorism and your favorite terrorists Muslim Brotherhood. Stop destroying the whatever left (if there is any) of the good relations between both countries.

We are aware of the fact that countries interests are a priority even if it’s going to be above the human rights and the freedom of speech that you and your administration gave us a headache about your faked democracy and false values! Who you are fooling Obama?! You didn’t mind to put your hands in terrorists hands, as long as it will serve your interests, like you did with your Muslim Brothers.

We do not accept your false values nor your faked democracy by force. We are learning democracy step by step on our own and our decisions are from our head and not any one else’s head. We are not lazy nor retards students in your kinder-garden! The only way for us to continue on our right path, and not yours, is to make mistakes, and to learn from our mistakes. It is okay to make mistakes as long as we do learn, and we are learning. Besides, what we do and determine is not of your damn business.

We do not accept your politicized US media false claims, that we were pushed and threatened by our government to participate in the presidential elections! What a nonsense and a big lie this is! You guys, denied our 30th of June revolution, we are not surprised that you deny our first free fair elections in Egypt’s history. Perhaps, your US media imbeciles can tell us, what’s the name and the type of this government that ever managed to terrorize and force more than 25 million voters to go and vote in any elections!???

If you continue your unacceptable interference in our internal affairs, you will not gain anything BUT more hatered and anger from the Egyptian people towards your country, and this anger and hatred, you Barack Bin Obama has created against your own country because of your wrong policies towards our region. STEP BACK & STOP this American arrogance and ignorance of yours.

Remember that Egyptians do not forget those who stood beside us in time of crisis, and those who stood against us and are challenging our will. Remember also that since the 25th of Jan 2011, Egyptians are the only decision maker in this country. Egyptian people don’t give a damn care about your peanuts aid, we also don’t care about your threats and the twisting arms policy of yours.

We managed to get out of your domination and Egypt will always be the leader of the whole Middle East area, like it or not, accept it 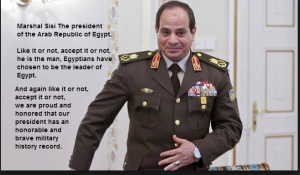 or not, this is the fact that you are trying to forget. Your Muslim Brothers are gone, your Middle East Creative Chaos Project was destroyed by the Egyptian’s 30th of June revolution.

Every country, you stepped in it Obama, turned to a terrorists heaven! Every country, you claimed that it is on the right path, was divided, ruled and controlled by terrorists under militants and extremists own Sharia laws, who slaughter innocents daily like sheep, due to US finance and support to these terrorists. YEAH, lecture us more and more about your definition of “democracy” and “Freedom”, especially what you left behind you,  in Libya and Iraq!

Look around you Obama, do you see what you did to Iraq, Libya, Syria, Yemen, Sudan! You have spread terrorism in the Middle East Area. If you think, terrorism is far from America, again look within America, the enemy is expanding not just in the States, but in Europe as well.

“Obama supports terrorism” this is what you are in the eyes of the majority of the Egyptian people. We know that you will never visit Egypt again since you conspired against us, you are not welcomed anyway.

Egypt is a Pure land and we do not accept that your dirty feet profane our land. Your hands is full of  Egyptians, Iraqis, Yemen, Sudanese, Libyans and Syrians blood. Obama, you only carry destruction, civil wars, devastation and disasters wherever you point at!

This is the new Egypt we intend to rebuild. We are going to build one stone over another, for our children’s future, we are going to do all our utmost efforts to reach the top of the mountain, one step after another, nothing will stop us again, it’s okay if we stumble, we know how to stand up again and continue the path we have chosen with our own free will. And remember Obama, the 30th of June revolution against Muslim Brotherhood fascism in Egypt, awakened the whole middle East area, and now, they are fighting Muslim Brothers terrorism too. When Egypt stood on its feet and raised the war on terrorism, this was the alert that awakened the whole region. When are you going to wake up Obama? our guess is: never!

We respect those who respect themselves and mind their own affairs and respect our intelligence and free choices, we disrespect and despise those who don’t show any respect in dealing with us, US administration, media and Obama who represent the United States of America, you totally lost the Egyptian people’s respect.

This is the new Egypt the whole world is going to see from now on, if you don’t respect us, get the hell out of our country