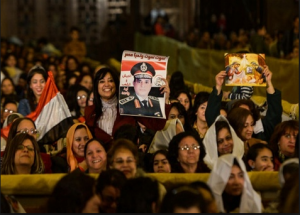 Egypt is moving forward to the 3rd of July road map, after the great revolution of  30/6/2013. Despite terrorism and all challenges, the Egyptians greatness lies in their strong will and unity, especially in crisis time.

US and foreign media are still calling 30/6/2013 a “military coup”, while Egyptians were choosing their next president! Describing 30/6 a coup and that Egypt is ruled by oppressors and murderers, doesn’t really match with reality in Egypt. Millions of Egyptians participated with their votes in the presidential elections 26, 27 and 28 May 2014.

The policy of foreign media, especially the US media has never changed towards Egypt since the 60’s. It’s the same fierce foreign media campaign and the organized working groups against Egypt. They are in total denial status of what is happening on the real ground in Egypt. Any way, The dogs bark, but the caravan moves on. We are not going to let a bunch of bribed imbeciles spoil our celebrations and the moving forward to what we have chosen with our own free will. 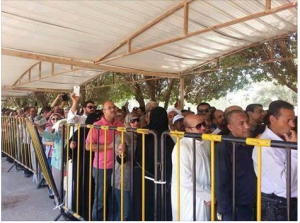 The final unofficial indications of the 2014 presidential elections

I guess this is the first time in the world’s history, that void votes in any elections come in the second rank!

The official result of the presidential elections will be announced before the 5th of June 2014.

The number of void votes did not surprise me. In the presidential elections 2012, there were about more than 880 thousands void votes and comparing to 2014 elections, the difference is not that big. Void voices were not only those who refused both candidates, but among them as well, many Egyptians who were not aware that writing any comments on the voting card than just choosing their candidate, makes the vote void.

This is also telling us that there are many Egyptians who don’t participate at all in any elections or referendums, for one reason or another, 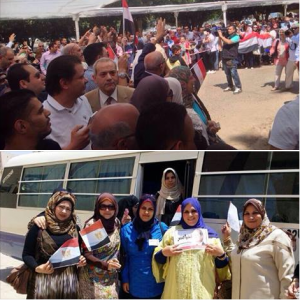 as the total number of voters who have the right to vote in Egypt  are about 53 million voters.

There was a major problem for about 5 to 7 million voters or less, who were not allowed to vote in the presidential elections. They are Egyptians who live in different cities in Egypt, than their original cities. They used to vote before in any city, they were located in, but not anymore. The superior elections committee insisted that they must vote in their original cities and not where they actually live, in order to avoid any duplicate votes.

When Muslim Brothers were in rule, they allowed voting by email! This was a big mess and a big forgery, to get as many votes as possible. The presidential elections of 2014, is considered the first fair elections in the Egyptian history. There were no food supplies, no bribes, no cards elections Blackening, no vote collectively like all serious violations which took place when Muslim Brothers were in power. People just went and vote voluntarily.

The only violations which took place in the current presidential elections, were committed by the supporters of both candidates outside the elections committees like propaganda, and according to international and local observers, they confirmed that they did not observe any major or suspected violation that spoiled this election. They also confirmed that the military and police forces, organized well this election and did not interfere in the process.

At the first day of the presidential elections, Muslim Brothers have spread rumors that the Egyptian people are boycotting the 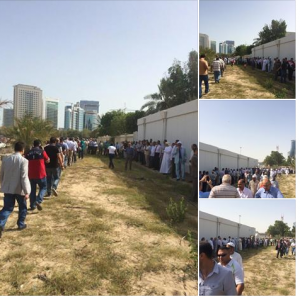 elections and there were no long queues in front of the elections committees (it was also spread by foreign and US media). Other rumors were spreading that the youth are boycotting the elections. Both rumors were not true, the purpose was just to spoil the elections. Muslim Brothers took advantages of under poverty and ignorant people (as usual), paid from 150 to 500 pounds and took their identities and to stop them from voting, and gave them identities back after the last day of elections.

These rumors purpose was to make it sound to the international community that Egyptians are divided and what happened on 30/6 was a coup. In addition to the threats of Muslim Brothers to the Egyptian people of boycotting the presidential elections, otherwise they will face terror attacks. 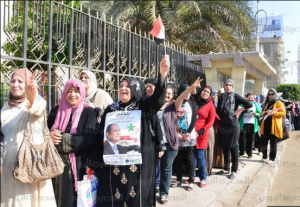 The threats attacks did not work. The Military and the police forces totally secured 14000 election committee all over the republic. The millions of Egyptians who revolted on 30/6/2013 against Muslim Brotherhood terrorists, are the same brave Egyptians who participated in the presidential elections without fearing any threats or terror attacks. 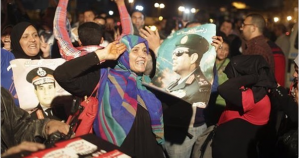 As an Egyptian citizen, I’m so happy and proud of the millions of Egyptians who participated in this election. Whether those who voted for Sabahy, or those who refused both candidates, but at least, they participated with their votes. Those who stayed home and did not participate in the elections or in any other previous elections, I think they just don’t care. Or whatever their reasons are, I still consider them irresponsible by taking this negative attitude.

The issue was not Marshal Sisi or Sabahy, it was a call from Egypt, it was a national duty. Those who did not meet with the call of 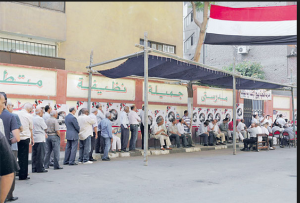 their country, they know that they don’t make a difference, because they don’t have an opinion or they don’t care, and not because their votes really matter. But they surely ask for their rights, while they disregard their duties towards their country. In order to have rights in any country, you need to do your duty first, or at least know your duties first, then ask for your rights.

Those who constantly boycott all elections and referendums, they criticize and object everything an anything, but they do not bother to make one single effort in changing negative things in Egypt to positive. How can they do this change, if they don’t start changing themselves first and become positive instead!

Special thanks and all my respect to all Egyptian great women, who participated strongly in this elections. The Egyptian women have showed the whole world that they are not just half of the community, but they are leaders and a very honorable example for the next generation. 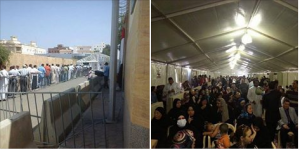 Special thanks to all those Egyptians who voted for Sabahy or refused both candidates, at least they took the trouble, stood in long queues for hours under a very hot temperature, and were positive even in saying no for both candidates. This is the real democracy that we need to learn. Accept all opinions, even if we disagree with them.

Special thanks and all appreciation and respect to our brave military and police forces, who did their duty in organizing and protecting all Egyptians who went and voted in the presidential elections.

Words can not describe how happy and proud I am, that we are moving forward to the road map, and we are learning what 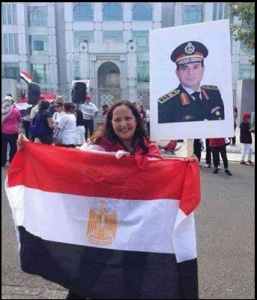 democracy means and we are also learning from our previous mistakes. I don’t feel frustrated anymore from the fierce US media campaign against Egypt, because the more they attack us, the more we know, that we are on the right track.

I cannot forget the blood of all our martyrs from armed forces, police and innocents citizens, who paid their own lives, so we live and celebrate this moment.

I was expecting from Hamdeen Sabahy who lost against both Marshal Sisi’s sweeping votes and void votes, that he will congratulate Sisi and the Egyptian people on what they have chosen based on their free will, but instead, he made a conference on 29/5/2014 and what he said in this conference was really totally contradictory.

Hameed indicated that this election was forged, but he will accept the final result! Hamdeen also mentioned that he was not expecting this result after two revolutions!
He added that he thinks that Egypt is moving forward to the police state, dictatorship and more corruption! He also challenged the Egyptian free will and choice when he mentioned that he welcomes all those Egyptians who did not vote for him, but soon, they will realize the truth and their choice was not right for real democracy!

Hamdeen attacked in his conference and accused everybody of corruption and forgery: the millions of Egyptians who participated in the elections, the judges who supervised the elections, the military and police forces, and the international and local observers! He didn’t exclude any one! 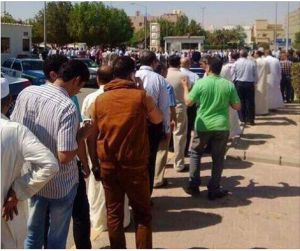 This is really a farce idiotic statement! If I’m going to ignore all what he said, I won’t ignore his challenge and denial of the Egyptian free will in choosing their president. Marshal Sisi’s supporters were willing to announce their respect to Hamdeen, if he just got out of this election as a loser, but a winner of more supporters than even those who voted for him, if he just accepted the result and joined Egyptians in building their country and learn democracy.

Is n’t this democracy!? The majority’s choices are applied on minorities, is n’t!? If he was the winner of this election, would he still claim that the elections were forged!!!?

I won’t let this statement of Hamdeen frustrate me either, I won’t look back, but I will look forward with all my Egyptian sisters and brothers. 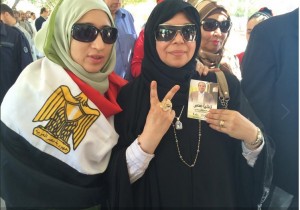 Hamdeen and US media are claiming. Egyptians voted with their free will to the man, they believe he will lead the country to a better future for all Egyptians, with the help and the hard work of all Egyptians.

All those who claim that Egypt is headed to a worse path than during Mubarak’s regime, they are either lying or mistaken. Because after two revolutions, the only decision maker in this country is the Egyptians themselves.

The Egyptians who voted in this election gave a hard slap on the face of all the haters and all Egypt’s enemies, who were betting on Egypt’s going bad! Egypt is going on the right track, where the Egyptian people want and with their own free will. 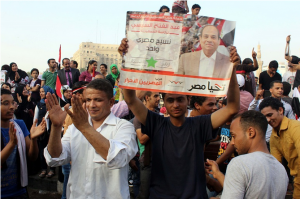