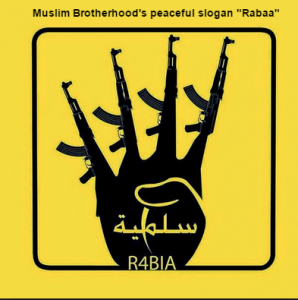 These terrorist organizations have different names and entities, but they belong to the same Jihadi thoughts and ideology rooted by Muslim Brotherhood leaders and founders.

Of course, the west and especially the US administration absolutely refuse to admit that Muslim Brotherhood is a terrorist organization, despite MB’s call for Islamic Jihad against Egypt on 27/1/2015, or even to consider the link between ISIS, Al-Qaeda, other terrorist groups and Muslim Brotherhood in countries like Syria and Libya. Despite all the blood shedding that is taking place in Egypt since the 30th of June 2013 revolution. Despite all clear evidences that prove MB organization is a terrorist armed group and not a political current like the US is claiming.

But I guess if the Obama’s administration and their allies, are calling those who are slaughtering people in Syria and Libya as “armed opposition” or “freedom fighters”, especially those who cut out the hearts of their victims and ate it, or those who slaughter month year old Syrian babies, then it is not absurd that the US consider Muslim Brotherhood as the “good terrorists“. After all, Muslim Brotherhood are just using bombs in killing Egyptians, and they did not start the beheading yet!

Obama claims that America’s values and principles are supporting freedom, democracy and human rights in the world; Meantime, these US principles and values Have a serious contradiction with the Obama’s top list terrorists best friends, like Erdogan of Turkey and the royal family in Qatar. It is no secret that Turkey and Qatar are the biggest sponsors of terrorist organizations, like Taliban, ISIS, Al-Qaeda and Muslim Brotherhood.

If Obama is “claiming” that he is fighting ISIS in Iraq and Syria, but not the ISIS in Libya, and won’t allow the Libyan army (or what’s left of it) to be armed against ISIS, unless Libyans sit together on the same table with all terrorist groups and make this moronic political reconciliation, this is also doesn’t sound absurd, because Obama cares for the ISIS future generations. 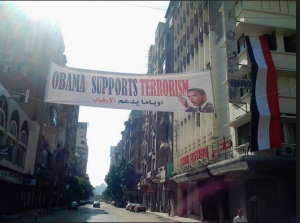 Obama is very concerned about the killing of terrorists, and he is looking for jobs vacancies and decent living for the “Good terrorists” who are beheading people due to the unemployment, poverty and the oppression of freedom that terrorists suffered from, according to Marie Harf and Obama’s recent statements in this regard.

I totally refuse this theory of religion and giving excuses or reasons for practicing terrorism. Terrorism is not about the religion or the poverty or whatever. Terrorists are a bunch of mercenaries, they get paid to kill, this is how they make their living. They just want the power. They want to establish their own territories and empire, they simply want to take over. But isn’t this what some superior countries have done already? They invaded other countries, destroyed them, divided their lands and territories and killed civilians, but under a different cover than religion.

The difference between terrorists and countries invaders, is just the cover they are using in destroying other 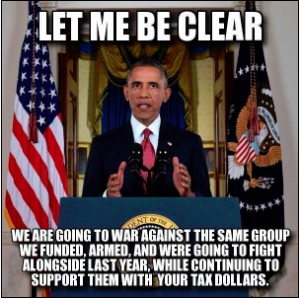 countries. Terrorists use “religion” as a cover, countries invaders use different covers like “war on terrorism”, “Weapon of mass destruction”, “Applying freedom and democracy”…and all of this bullshit.

It is just a matter of power. Who gets the power and who control the world, it is as simple as this. This is not a theory or speculation, this is history.

The following is a documentary movie, which original content in Arabic made  by OnTV in Egypt, and I translated it to English. The content of the video shows the link between all terrorist groups like ISIS, Al-Qaeda and Muslim Brotherhood. This documentary movie is not about theories or speculations, it’s about historical facts and documentations.

In addition, the video shows the current leader of Al-Qaeda Ayman Al-Zawahiri admitting in one of his books, that it is actually the Muslim Brotherhood leader Sayed Qutb, who wrote the constitution of Al-Qaeda in one of his books about the armed jihad to change countries idea and entities by all kinds of force. It also shows Mohamed Elbeltagy Muslim Brotherhood leader declaring that the terror attacks in Sinai will stop the minute Mohamed Morsi the Muslim Brothers former president is back to power again.

The U.S. and the Western media’s wailers have lost credibility and respect with most Egyptians. Why? the answer is in the following videos. And if the above documentary movie was not convincing enough, then I’m sure the following videos will convince you, and if it doesn’t convince you that there is no difference between Muslim Brotherhood and ISIS, then you must convince me that the over 33 million Egyptians who took the streets starting from the 21st of June to the 3rd of July & on the 27th of July 2013 and overthrew the Muslim Brothers regime, did not exist except in my dreams.

Video’s original content and English translation made by EgyUp.com. Watch the video, and you will see clearly the difference between what is happening on the real ground, and the faking news that your media is fabricating about Egypt, so they can convince you that Muslim Brotherhood are not terrorists but they are a political innocent current according to their claims.

Video dated 2/7/2013. Muslim Brotherhood carrying weapons and sticks, after breaking into one of the private properties (library), in Bin Alsarayat area Cairo. The video shows Muslim Brotherhood thugs brutally beating the owner and the employees of the library, and destroyed all library’s contents.

14/8/2013 the date of the disengagement of the Muslim Brotherhood armed sit-in, in Rabaa square Cairo. This was the fully armed sit-in, that the western media’s wailers keep claiming till today that the Muslim Brotherhood were peaceful demonstrators and the security forces massacred them. I guess they consider MB carrying weapons and targeting civilians or police forces are actually the good terrorists.

The following video was filmed by an Egyptian citizen in Giza Cairo, witnessed one of the Muslim Brotherhood armed demonstrations in his neighborhood. video Published on 15 Jan 2015.

The following video published by the Admin of the official page of the Egyptian armed forces in English language. The video is about the grand deception of Muslim Brotherhood in using two different languages, when addressing their speech to the international public opinion, and the other speech they are addressing inside Egypt.  It also shows whether or not Muslim Brotherhood are peaceful political current, or a terrorist organization not less criminal and savage than ISIS.

Professor Tim Anderson, a Senior Lecturer in Political Economy at the University of Sydney published on 8 March 2015, an article titled: The Relationship between Washington and ISIS: The Evidence

The article highlighted the question of what is the broader evidence on Washington’s covert links with ISIS? It’s a very interesting article based on facts and not speculations. To read the full article, please click on the article’s link mentioned above.