Terrorism is spreading in the world and we are fighting one enemy, despite their different names, groups or organizations.

When terror attacks took place in France and in other continents recently, the world turned up side down, and countries in the west started to take all security measures to protect their own citizens from any possible or future terror attacks.

Human rights organizations, International press and officials in different countries in the west, never mentioned anything about applying the “policy of restraint” in dealing with those recent terror attacks. They called spade, a spade, when terrorism attack their countries. But when terror attacks are taking place in Egypt, all of these entities demand the Egyptian State to deal with terror attacks by applying the policy of restraint, and they don’t call what is taking place in Egypt as “terror attacks”, but they call it Egypt is oppressing peaceful demonstrations, freedom of speech and killing peaceful demonstrators.

In this article, I’m going to post some videos and screenshots of what the Muslim Brotherhood and their militia and 6 of April movement committed recently in Egypt and I want any one who really has a working brain, to tell me whether these are terror attacks, or peaceful demonstrations, and how can the security forces or the armed forces deal with it by using the restraint policy!

(6 of April movement is described by international press as the spearheads of the 25th of Jan, 6 of April movement announced on 26/1/2015 that they have joined the Muslim brotherhood Organization in their armed resistance against the Egyptian State)

I wonder, is there any human rights to those Egyptian police individuals and armed forces who got killed by terrorists? Or because they are not white guys or not originally from Europe or the States or any other developed country, their blood is cheap and they don’t deserve to be equal even to animals rights that do have rights in these countries!!! Double standards even when dealing with terrorism and even when it concerns the blood of innocents.

The capture and the assassination of the Egyptian officer Ayman Aldosouky. 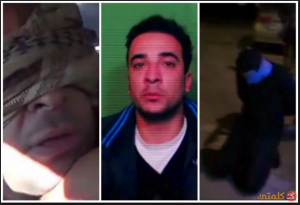 The following video, is from the armed violent demonstrations of Muslim Brotherhood that took place in Matariya area, Cairo on 25 and 26 Jan 2015, showing Muslim Brotherhood supporters are shooting at each other and accusing the police of killing and injuring their “peaceful demonstrators”!

The following video is showing the consequences of the terror attacks committed by Muslim Brotherhood and 6 of April movement in Cairo, Alexandria and other cities of burning private and public properties on 25 Jan 2015.

Explosive expert diffusing bombs in Matryia area Cairo on 25/1/2015. Just for the record, the Egyptians are the only people on this entire planet, who refuse to leave or go home, whenever there is a bomb planted in the street. Police asked people to leave and to stay away, but they refused and stayed to watch the diffusing of the bomb.

The newspaper who published exclusively this video, belongs to the Muslim Brotherhood distorted ideology. It’s their own acts and words, and they are proud of destroying public properties and creating chaos. 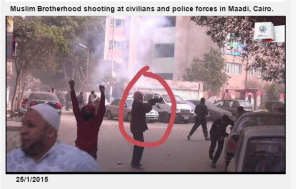 The following are screenshots published on different Muslim Brotherhood’s accounts on social media on 25 and 26 Jan 2015, calling themselves “popular armed resistance against the Egyptian State, to get back Muslim Brotherhood to power to rule with Islamic Sharia Laws in Egypt”. They wrote under each screenshot, their success and achievements in fighting against civilians, police and armed forces, burning private and public properties and they are very proud of all the terror attacks, they have committed in Egypt against those they describe as “The enemies of Islam”. 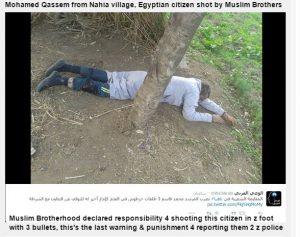 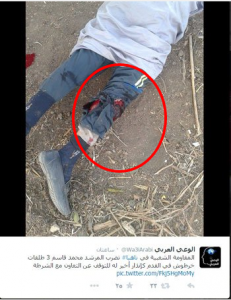 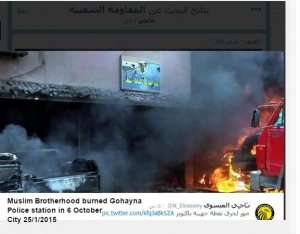 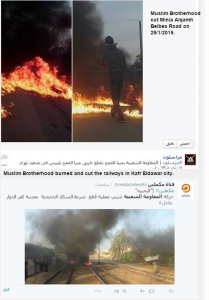 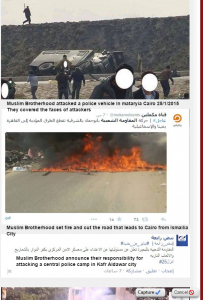 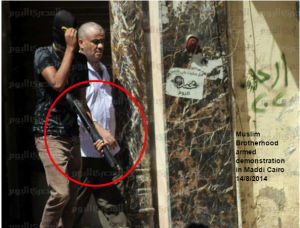 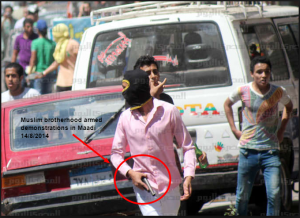 Muslim Brotherhood planted bombs and explosives devices in different areas in Egypt from Alexandria city to Aswan city. The explosives experts succeeded in diffusing 50 explosive devices and bombs in different areas and cities in Egypt on 24/1 and 25/1/2015. Terrorists are targeting the electricity high pressure towers, Gas Lines, public buses and private and public properties.

Like I wrote in my previous article, Muslim Brotherhood want to give an image to the world that terrorism is spreading in Egypt, and it is getting out of the police and armed forces control, and all this to ruin Egypt’s image in the world and to isolate Egypt from the rest of the world and also to ruin the next Egyptian economical conference which is going to be held in Sharm Elsheikh Egypt, from the 13th till the 15th of March 2015.

Terrorism definitely scares every one on planet earth, they don’t just terrorize you or kill you, they also ENJOY torturing you, and watch you dying. Patriotism, is loving your country like you love your own child. If someone tried to harm or attack your child, you certainly defend your child even if it will cost you your own life.

There are many people here in Egypt who can just move and live in any other country in this world, but they don’t. Because they have a cause to defend, they have a land to protect, they have a country and future and they are determined to build, no matter what the challenges or the difficulties are.

Egypt is fighting its own war against terrorism Alone, because the hypocritical double standard world doesn’t call spade a spade, unless they have some kind of interest. And so is Syria, Iraq, Libya and poor Yemen.

Those who talk about the 25th of Jan or the Arab spring and describe it as revolution for freedom, democracy and social justice, well what I’ve personally seen and lived so far is that if I can call it a “revolution”, then it was a revolution for demolition and destruction, and not for construction or for the change.