On 9/2/2015, following the cultural celebration in the Egyptian Opera House, attended by President Abdel Fattah 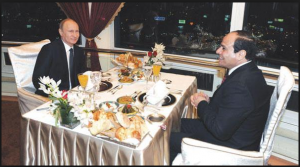 For those who don’t know the story behind the construction of the Cairo Tower, or what was the message addressed to the Obama’s administration from the Cairo Tower on 9/2/2015:

Built from 1954 to 1961, the Cairo tower was designed by Naoum Chebib
Egyptian architect and built with the Soviet’s help, Egypt’s second most famous landmark after the Pyramids of Giza, it stands in the Zamalek district on Gezira Island in the River Nile, close to Downtown. The tower is an iconic symbol of the Ancient Egypt. 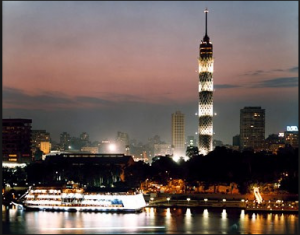 In the 1960s, the Egyptian President Gamal Abdel Nasser announced that the funds for the construction of the Tower $1,000,000 was given to him as a “personal gift” from the United States government, in an attempt to bribe him, and to have influence on Nasser to give up and to change his situation and support for the Arab nation’s causes towards the west colonization and occupation of the Arab countries. Nasser decided to publicly rebuke the U.S. government by transferring the entirety of the funds to the Egyptian government for use in building the Tower.

The money passed to Nasser by CIA bagman Kermit Roosevelt also as a bribe to stay on America’s side during the Cold War.

Despite that Egypt at that time, was in big need for the money to build its infrastructure, but President Nasser wanted to send a message to the USA that “he was not for sale” and in the meantime to teach the Egyptian people, the meaning of dignity even in the time of need. The Cairo tower is not just a symbol of the ancient Egypt, but it is mainly a symbol of dignity to all Egyptians to never forget the meaning of “dignity” and “patriotism”.

The message that was sent on 9/2/2015 from the Cairo tower to the Obama’s administration, is a reminder to the white house that the current leadership of Egypt is also not for sale. The US carrot and stick game with Egypt, is certainly over after the 30/6/2013 Egyptian great revolution.

The message that was sent from the Cairo Tower and from the majority of Egyptian people, is to tell the Obama’s 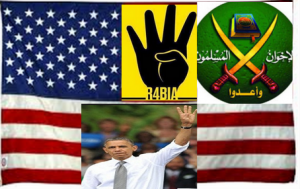 administration and the US congress who is supposed to represent the American people, that It is really a farce and a political prostitution practiced by the US officials to support Egyptians as they always claim, meantime they are supporting and welcoming Muslim Brotherhood terrorists in the heart of America. They support us against terrorism, and at the same moment, they support terrorism against us. History repeats itself. Which reminds me of Syria, I have never heard of “armed oppositions”! The US is calling terrorism in Syria as “armed oppositions and freedom fighters”…just like they call Muslim Brotherhood terrorist organization as “political opponents” or the representatives of “political moderate Islam”!

The message that was sent to the US and all countries who are hosting Muslim Brotherhood terrorists and facilitating their job in preparing and launching terror attacks against Egypt, is that Egypt will never forget the countries who supported Egyptians against terrorism, like we will never forget those who are supporting terrorism against Egypt’s unity and stability.

If the American people agree on their congress and Obama’s US administration making dirty deals with terrorists organizations against Egypt’s national security, then they can enjoy it, even to the dregs! And no one out there have the right to blame Egypt for looking to its own interests. No one have the right to blame us for saying that the US have lost its credibility and influence in the entire world and above all, US lost the Egyptian people’s respect, the minute their president and Congress made deals with mercenaries and terrorists against Egyptians security and survival.

Countries are supposed to build mutual relations with other countries in all fields, while the United States of America are building relations with a terrorist organization against the Egyptian state’s national security.

Of course, Russia is not interested in the beauty of the Egyptians eyes, they have political interests too, just like the US and all countries out there, it’s all a matter of “interests” and a policy of “give and take”… But despite these interests, Russia and many Gulf countries “except Qatar”, supported Egyptians and the Egyptian state, and did not put their hands in the bloody dirty hands of Muslim Brotherhood against Egypt’s national security, like the White house did. 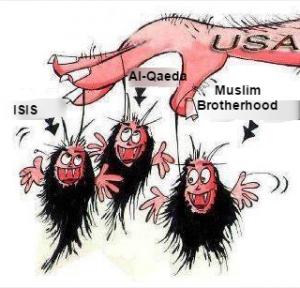 In addition, these countries who supported Egypt, did not challenge the Egyptian people’s will and did not hold the “Apache helicopters” that Egypt needed to fight terrorism in Sinai. They did not practice political influence or pressure on the EU to stop supporting Egypt while fighting terrorism like the USA did. These countries showed respect to the Egyptian people’s free choices in running their internal affairs as they want, while the USA and their allies are still trying to break our will. These countries did not call our 30/6 revolution a “MILITARY COUP”, like the US and their allies did.

The White House is witnessing people getting burned alive, slaughtered, tortured and bombed, while they still have two definitions for “terrorism”. In a region, they call them “terrorists”, and in another region they dare to call them “armed oppositions”!

Before the US officials accuse the Egyptian leadership of being oppressors and tyrants towards “Terrorists human rights”, they instead, should make a little effort to refresh their memory, that no American official has ever been brought before an international court after the US invasion to Arab countries, destruction of the infrastructures, dispersal of Armies, killing civilians, the takeover of oil resources, and kept silent about the White house shielding its allies from being punished under international law.

Remember, that superior countries keep blabbering that there is a  strategy and an international coalition to fight terrorism, while the world community is fueling the people in the middle east with anger, hatred, bitterness and resentment towards the U.S. and its allies foreign policy and double standards. If there is a coalition in the first place, it is the US-MB terrorism’s coalition.

Remember, that  as long as we do not agree on one definition for “Terrorism”, we will never be able to defeat it.

Shame on humanity, to listen to hypocrites speeches and fake lectures about supporting human rights, freedom, dignity, values and principles from top leaders in the world, who’s hands are soiled with innocents blood. Shame on humanity, that Obama’s best friends top list are the terrorists and his allies are countries hosting terrorism from all over the world and they are ruling their own countries with iron, fire and terror policy like Qatar and Turkey.

The United States government who has confirmed that the Muslim Brotherhood are not a “terrorist organisation”, is the same government who confirmed after Putin’s visit to Egypt, that the mutual relations between Egypt and the US are very strong. Excuse me, No, it is neither mutual nor strong. Egyptians do not respect the US government and they despise the blatant US policy of double standards, which part the US officials don’t understand!

Then, you hear the official Spokeswoman of “Imbeciles” for the US Department of State and the Central Intelligence Agency, Mrs. Marie Harf, confirming and repeating over and over her broken boring record, that  The Muslim Brotherhood is not designated as a terrorist organisation by the United States, and totally ignored the Muslim Brotherhood call for violence and islamic Jihad against Egypt, and totally ignored and disregarded the Muslim Brotherhood direct threats which was broadcast on Muslim Brotherhood TV from Turkey on 29/1/2015, warning of terror attacks against foreign nationals and interests in Egypt. In addition, they gave a deadline 11/2/2015, for foreigners and foreign companies to leave Egypt, saying that after that deadline, “all their interests in the countries of the Middle East will be subject to harsh attacks with direct consequences.” Muslim Brotherhood threatened to target embassies, foreign companies investing in Egypt and foreigners who visit or work in Egypt.

Despite these threats addressed directly from Muslim Brotherhood TV channel from Turkey, we do live a normal daily life in Egypt. And if these threats have any effects on the Egyptian people, they are positive effects because these threats make us insist with no hesitation or fear on winning this war against terrorism.

Those out there who want to support terrorism against Egypt, go ahead and enjoy your coalition, but remember that this coalition will soon be over, when they turn their threats towards you…They are not that far from you, they do live within your territories, because your governments provided them with safe haven…

When I hear any US or EU officials talking about their countries good strong relations with Egypt and their support to the Egyptian people, it really feels disgusting to the point of vomiting…

We will respect those who treat us with respect. But those who think that their Aid can be the pressure and the winning card, they can break us with, or those who are trying to use the policy of subjugation and enslavement  and they are underestimating the power and the will of the Egyptian people and they humiliate our intelligence, they lost our respect, and what they get from us is nothing but contempt.

#Long_Live_Egypt and #Long_Live all countries and people who fight for peace, stability, national security, survival and the right cause.

#Those who make deals with terrorists against Egypt or against any country out there, may you rot and rest in hell.