elimination of terrorism in the Sinai Peninsula and on all strategic directions, our Egyptian armed forces managed during the month of February 2015, to carry out a number of raids against terrorist elements, which resulted as follows:

First, the center and the city of Al-Arish

17 terrorist elements got killed by the Egyptian armed forces, during confrontations and raids on the terrorist hotbeds.

Destruction of: 22 residences and gathering areas of terrorist elements – terrorists vehicles and 32 different type of cars – 17 motorcycles without plates (used in executing terror attacks against Armed forces and civil police).

Detonation of:  (3) explosive devices from a distance, planted by terrorist elements to target the Egyptian troops during the hostilities operations.

Egyptian Armed forces dealt with all terrorist elements without causing damage or casualties among the troops. 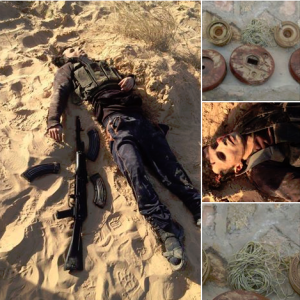 Second, the center and the city of Sheikh Zuid

1. The success of Sheikh Zuid’s security forces in foiling a terrorist attempt to blow up the police station, security forces detonated 2 vehicles bomb used in the terror attack from a distance and all terrorists were killed on board.

2. Armed forces of one of military ambushes, confronted successfully a mortar and fire terror attack and killed Mustafa Mazeeg Farid (Ansar Beit Almakdes terrorist element), Without causing damage or casualties among the troops. 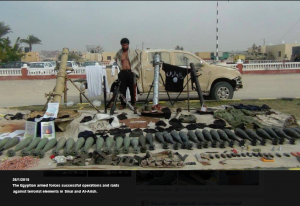 6. (4) terrorists targeted by helicopter, while they were trying to escape inside a car, resulted the killing of all terrorists and the destruction of the car.

7.  (7) terrorist elements killed, 7 others injured, during the implementation of the armed helicopter air cover to secure the troops during the proceedings of the raids.

8.  (8) terrorist elements killed during the raids.

9. The arrest of 10 individuals wanted for security bodies, among them 2 individuals of Ansar Beit Almakdes terrorist organization and 126 suspects.

10. Destruction of 48 residences and gathering areas of terrorist elements.

11. Destruction of 36 different type of terrorist vehicles, 94 motorcycles without plates used in terror attacks against civil police and armed forces.

12. Massive explosion resulted from detonating from distance a water truck bomb without plates.

13. Detonation from distance of explosive device planted by some terrorist elements, in targeting troops during confrontations.

15. Destruction of weapons store, in addition to ammunition and materials used in making explosive devices related 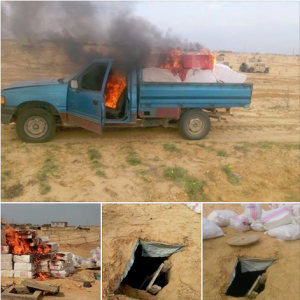 Third, the center and the city of Rafah

1- The success of one of the armed forces ambushes in response to terrorist attack’s fire used (mortar -RBG- machine guns). The ambush forces used heavy fire, resulted killing  (3) terrorist elements without causing damage or casualties among the troops.

2- The armed forces targeted a meeting of 21 terrorist elements inside one of their residences, including a store contained the explosive material (ABC) used for the preparation of explosive devices. Resulted, the destruction of the residence and the store and all terrorists elements were killed inside.

4- The arrest of 7 individuals wanted for security bodies and 90 suspects.

5- The destruction of 15 residences and gathering areas related to terrorists elements.

6- Destruction of 10 vehicles (different types) – 125 motorcycles without plates, used in terror attacks against the armed forces and civil police.

7- Detonation from distance of a Mercedes car bomb  without plates, resulted massive explosion.

8- Detonation from distance of 2 explosive devices, planted by terrorist elements in targeting the troops during confrontations.

Egypt defies terrorism, this war is fought by real men who dedicated their lives to defend their own country and people in Egypt, there is no place for semi-men, no place in this war for cloners.

Let the US administration occupied in finding jobs for unemployed terrorists, let the White house busy with their double standards definition for terrorism “The good terrorists and the bad terrorists”

War against terrorism is led by real men; idiots, imbeciles and morons, please abstained and drink a big cup of shut the hell up.