Twitter and Facebook, The two most popular social networks in the world for communicating and advertising are 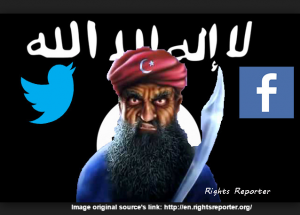 participating in spreading and Marketing the industry of terrorism and death in the entire world.

Twitter and Facebook became a tool of influence in communicating, recruiting and terrorizing, that is intensively used by different terrorist elements and armed organizations, not just in Egypt but in the entire world.

Imagine with me, that the majority of terror attacks which you read about in the newspapers daily, were actually planned and prepared through the social media networks, and for free!!!

Different terrorist groups are advertising terrorism and death on both Facebook and Twitter, before and after the terror attacks.

You have an account on the same social media to advertise your business or to communicate with friends or possible clients, and there is another user but he is not like you, he is a terrorist, he gets paid to recruit youth from all over the world to slaughter people.

Are Facebook and Twitter afraid to lose shareholders, business and advertisers? They certainly don’t mind that innocent people are losing their lives because of the free facilities and services terrorists are having through the social media without any content checking that is not just violating our rights, but it is a direct threat to our survival on this planet. Because Terrorism is not less dangerous than The Ebola virus!

In addition, they inform you that if you believe that an account is representing a direct threat to your life or safety, you contact your local authority!!! When you contact your local authority, how can they stop the threat or the crime or the terror attacks from happening, if they cannot get the IP addresses, except maybe through a court order! Or they keep on chatting with the terrorist, till they succeed in tracing his location!!!

I’ll tell you what you can do and how it is handled by Facebook and twitter when you report a terrorist account, from what I have experienced in this regard.

On the 7th of March 2015, I reported a terrorist movement on Facebook that is related to Muslim Brotherhood called “The movement of revolutionary punishment” ). They used their account in advertising all terror attacks they have committed against civilians, police and army individuals, public and private properties in Egypt. They used to provide images and videos for almost all their terror attacks, and they were not shy or scared to express their proudness and happiness after every successful terror operation, especially when it comes to burning private and public properties and also killing police individuals.

They stated on their Facebook page, that it was the only official page for their movement!!! I can understand this, because there are other amateur terrorists who were competing with them, in adopting some of their terror attacks and claimed responsibility.

Reporting on Fcaebook is very easy, you just Go to the Page you want to

report, Click on the Page’s cover photo ((as and where it shows in the screenshot on the left). Select Report Page , then choose the option that best describes the issue and follow the on-screen instructions.  Or you go to a certain post, and you click on the right side arrow, (as it shows in the screenshot on the right), then choose i don’t like this post, and follow steps.

First, I received a notification from Facebook, that the page I reported was not removed because it didn’t violate their rules or policy. I really got angry after I’ve read their first notification, especially that all they needed to do is just to read the content of the reported page timeline.

Then I got myself together, and I searched for another way to get their attention. So, I searched for the Help community center on Facebook, Clicked on Ask a question and I reported the issue once again, attached screenshots from their timeline that proved my report against them, as it appear in the following screenshot. 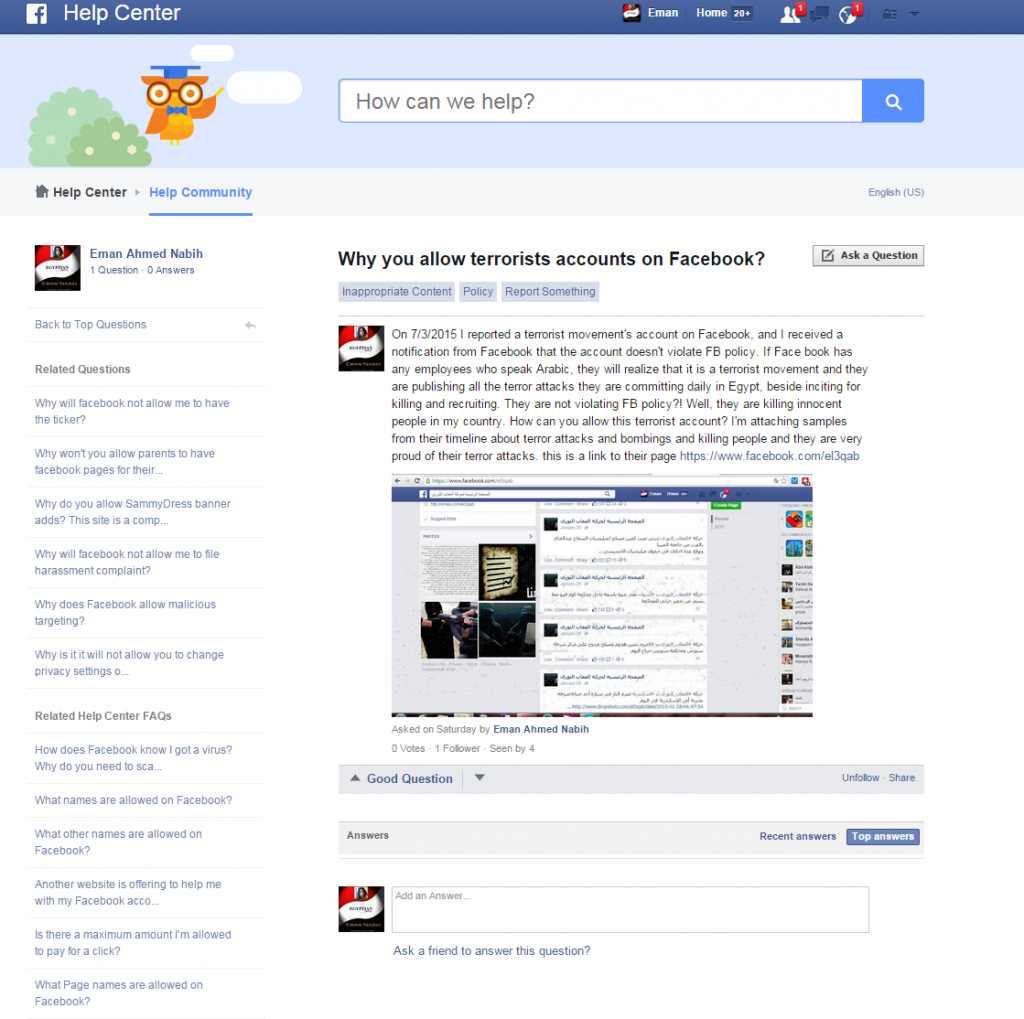 On 11/3/2015, I got the following revised notification from Facebook, that the page was removed because it violated their rules.

I really wondered, How come they haven’t realized that the page was violating their rules and policy the first time I reported it? Especially that on this specific page, you don’t need to report a specific post, all their timeline is about their terror attacks provided with photos and videos. Facebook only realized the violation after my second report through the Help Center Community. Do they really have employees who are checking content of every account? I doubt, this is almost impossible with the huge numbers of users. Or, maybe they have an automated system to check content? Well, I don’t think so, because if they do, why haven’t they removed many accounts on their network that contain different kinds of violations to their rules?!

The same terrorist movement I reported to Facebook, has two accounts on twitter. So, I went through the same procedures, by reporting both accounts to twitter. This is what I experienced:

This is what I tried to report to Twitter and I have screenshots available, which proves they are a Muslim Brotherhood terrorist organization. If they have any one that speaks Arabic, it will be very easy to recognize what they are using this account for. What this terrorist writes on social media is not threats, it’s real terror attacks, that you read about in the newspapers, and they are announcing their responsibility for all of their terror acts and they provide photos and videos of their operations:

Twitter gives you many options to report an account that is violating their rules. So I clicked on the help center, abusive user forms, as this was the only option for me to choose, as I did not find any other option that matches with my report.

Then I went on filling the form as it appears in the following screenshot:

Unfortunately, I was not able to submit the report as it shows above. I

really don’t know if I’m the stupid retard who doesn’t understand why it didn’t accept the URL’s I added, that show the tweets that violates Twitter rules, even that I followed the Twitter help center instructions . I added the URL’s by going to each tweet and clicked on each of them to enlarge, Or by clicking on details, then copied the URL and pasted on twitter form, as the screenshots show.

The timeline of this account on Twitter is full of terrorism content without any exceptions. So, I tried another option to report, by reporting some tweets as it shows in the following screenshots: 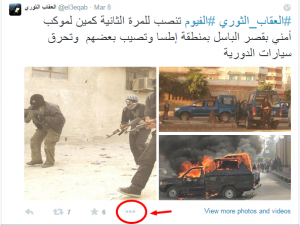 Then the following appears, you choose the option that suits you, I clicked on Report: 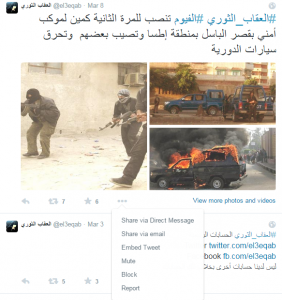 Then the following appears, you click on Next after each selected option 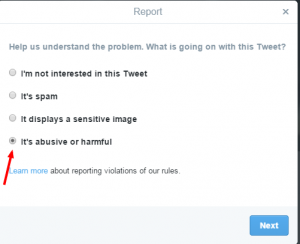 I got the following, which none matches with my report. What else to choose but Harassment!!! 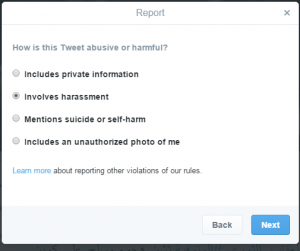 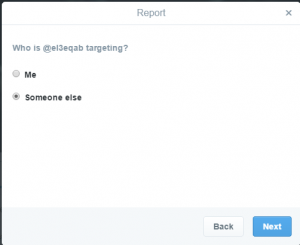 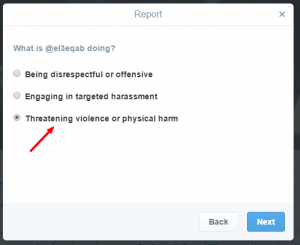 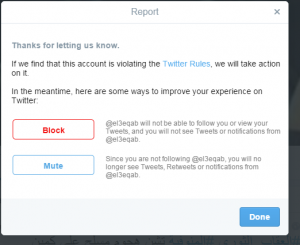 So, at the end, they tell you that they will check, whether it is violating their rules or not, and whether you want to block or mute, as these are some ways to improve your experience on Twitter!  What experience? I wanted to report terrorists on Twitter, terrorists who kill people daily, terrorists who burn public and private properties, terrorists who plant bombs in the streets. If there was anyway to report this as it should be “a terrorist threat”, You and me can be the reason of saving many people from getting killed, not just in Egypt, but in the entire world. We can at least slow them down, make it hard for them to communicate, and stop them from planning their terror attacks through the social media.

I can understand that these kinds of options can work with someone that is annoying, so you just block him/her and finished. But how can you Block or Mute Terrorists on the social media? While you know, that blocking or muting them, won’t stop them from killing people. And if you block them, they won’t block you, simply because all of us now, are not just a target in our own countries, but we are a target on the Social media too! Because this is how they communicate and prepare for slaughtering, killing, recruiting and inciting for shedding the blood of innocents.

On 13/3/2015, I reported again the same terrorist accounts to Twitter, finally their form worked well. I’m still waiting for their response.

Facebook and Twitter are a great social networks for communicating and for marketing any type of business, now it became a safe haven for terrorists.

If Facebook and Twitter don’t have enough employees to check contents that represent terrorism, then they should start employing many. If they can’t, why not check if there is automated system that can do so, and If this is also not possible, then they must find a way to control this spreading of terrorism through the social networks.

If Facebook and Twitter decide to take this issue seriously and do something about it, I know that checking the contents that violate the social media’s rules and removing their pages and banning them from opening new accounts, is not going to stop terrorism. But at least, it will slow them down, it will have a big effect on terrorists activities.

The last thing I want to say here, is that if Facebook and Twitter consider that hiding IP Addresses of their users is worth it for protecting users privacy and rights, I believe that protecting people’s life from getting killed and their rights in survival worth a lot more and it is more important than their IP addresses. What is the use of hiding your or my IP address, if someone out there is planning to kill you or me? What is the use of having policy and rules that are being violated and no one cares about checking content that consider a serious threats on people’s life. If Facebook and Twitter are protecting terrorists rights in spreading terrorism on the social networks, then there is something wrong out there.

To whom it may concern, I really hope that those who are managing Facebook and Twitter realize that what I’m reporting is true and terrifying and I don’t want to believe they are really ignoring this issue. Please help us in saving innocents lives, help us to make social media to stay for the purpose it was created for, to communicate with others, to market business and to enjoy our time on the social networks, not to be targeted by terrorists.

Twitter and Facebook are claiming that such pages are not violating their rules, well how about that they are violating people’s right in survival… The local police or authority can do nothing, they can not trace their location, it is not easy… Again, I know that shutting down their accounts won’t stop terrorism, but at least it will slow them down. I believe it is our duty to report such pages and not to close our eyes and simply don’t care…

Cloud VPS (virtual private server) is a modern hosting service that is designed for those who want high flexibility, security, quality and cost. The service includes a private virtual server that is hosted where you as a customer can make upgrades and downgrades of resources (IP addresses, traffic, storage space, RAM, etc.) without affecting your server availability.
Ipeer cygate provides great services like Virtuell Server, Webhotell, Webhotell Firma. Don’t miss out the chance and check their services to get the best out of it.