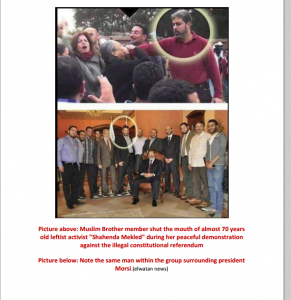 Youm7 newspaper published on 21/4/2015, the reasons of the court verdict related to the case known in the Egyptian media as “Etihadeya presidential palace massacre“. The violent event took place on the 5th and the 6 of December 2012 in front of the presidential palace in Heliopolis Cairo. Resulted the death of 10 and more than 800 severe injuries.

Demonstrations took place due to the Muslim Brotherhood constitutional decree issued against the law and the constitution, providing the former president of full executive and legislative power above the law.

The court sentenced 20 years jail on the defendant Mohamed Morsi (former president of Egypt) and the rest of Muslim Brotherhood defendants.

The defendants used violence and illegal detention of the victims (demonstrators) and practiced physical torture on them. Thus, the court increased the penalty according to the law up to 20 years.

The court based the verdict on victims of torture testimonies, the republican guards and the former minister of Interior testimonies, who testified that they were given a direct order by the former president to deal with the demonstrators by absolute force. 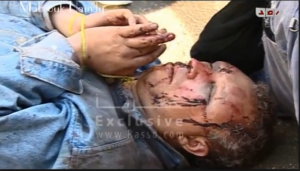 Former Ambassador of Egypt in Venezuela Yehia Zkaria Negm, he got tortured by Muslim Brotherhood in front of Etihadeya presidential palace 5 December 2012

The court also based the verdict on the video tapes filmed by Muslim Brotherhood themselves, from the minute they entered the presidential palace area using force and weapons, till the capture and the torture of the peaceful demonstrators.

This specific court case evidences and particularly the video tapes, were filmed by the Muslim Brotherhood themselves. They filmed each other while attacking and torturing Egyptian demonstrators.

In addition, the decision of attacking the demonstrators was taken by the Muslim Brotherhood organization, after they held a meeting in their main head office in Cairo, and Mohamed Morsi was instructed to leave the presidential palace before the attack on demonstrators started, so he won’t be related to the attack. Especially after the ministry of interior and the republican guards refused his orders to disengage the demonstrations by force.

The republican guards chief testified that the defendant Asad Alshekha (Muslim brotherhood leader and was occupying the post of deputy chief of staff of the president), told him that the Muslim Brotherhood are going to disengage the demonstrations by force, using their own men. 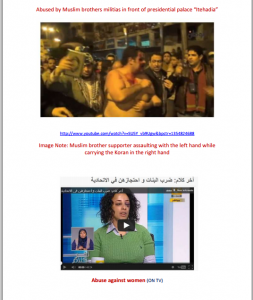 The court confirmed that the bullets used in the killing are internationally forbidden “Expanding bullets” It is informally known as a Dum-dum or dumdum bullets. They produce a larger diameter wounds. These bullets were found in the journalist body.

The Muslim Brotherhood used their own members, leaders and militia in attacking the demonstrators, the police was not able to interfere or identify the killers, because according to the national security and the police investigators there were about 70,000 of Muslim Brotherhood supporters and about 60,000 opponents to Muslim Brotherhood, in addition to many thugs and mobs and hit and run cases.

And there comes the fools and the blatant liars who are taking from the misinformation and the mislead a profession in misleading the international public opinion, every time there is a court verdict issued against the Muslim Brotherhood terrorist organization based on real true evidences and not faked ones like they claim. 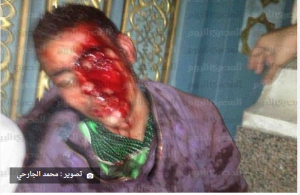 If  the justice of the western countries, the international human rights organizations and foreign press and western 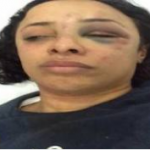 governments who practice double standards with such unprecedented immorality, is represented now in defending and supporting killers and terrorists and wasting victims rights, I’m leaving here the following videos that speak for itself with sound and image.

The same style of ISIS to terrorize any opponent or any one who just think of opposing the MB fascist regime. Egyptian people should thank the Muslim Brotherhood for cooperating with them in exposing their crimes with sound and image filmed from their own cameras and mobiles.

Muslim Brotherhood said that they came to rule Egypt for at least 500 years and they have all the western countries support to their regime and they have large armies from Jihadist groups who will immediately interfere in Egypt, the minute they are exposed to any opposition or toppling to their regime.

The following are some of El Etehadeya presidential palace massacre videos filmed by Muslim Brotherhood while torturing demonstrators in different areas. One for instance was  from inside the mosque in front of the palace in a force show to terrorize any one in Egypt. That was the message, to any one who just think of opposing them, will face the same destiny.

They were chanting Egypt is an Islamic country ruled by Sharia laws. They were also carrying signs during their marches to the palace area having Muslim Brotherhood political party slogans “freedom and justice party” from different cities in Egypt. Carrying Mohamed Mursi’s pictures. In the videos, they said that they are responding to Mohamed Mursi’s orders and supporting him and Muslim Brothers against their enemies and enemies of Islam. They mentioned that after they are done with the enemies at the presidential palace area, Judge Tahany Elgebaly and judge Alzend, the chairman of judges club in Egypt are next on their list.

They also claimed that those who protest against Muslim Brothers, they drink alcohol and taking drugs and Tramadol pills!

4/12/2012, source Alwatan Newspaper. The video says it all. They were torturing him by one hand, and the other hand was carrying the Muslims holy book.

Video of Muslim Brotherhood shooting at protesters in the presidential palace area. Some got killed and others got seriously injured. Source: Moseerin collective MB crimes

The Former Ambassador’s testimony:” When I heard the news about Muslim Brotherhood attacks against peaceful protests in front of Etihadeya palace, I went to see what was happening and I eye-witnessed Muslim Brotherhood attacking women and beating protesters and destroying their tents. Muslim Brotherhood attacked us with weapons, knives, firearms and tear Gas. Many of the Muslim Brotherhood kidnapped me and were beating me brutally in different parts of my body, the kind of beating that could have led to my death. They broke my ribs, my head was deeply injured. I was bleeding and they kept beating me. They were jumping on my chest with their shoes. They dragged me with others and held us in the presidential palace. After they tried to force us to confess that we were paid to protest against Mursi and to attack the palace, they delivered us to the police.

I also eye-witnessed kids under 15 years old, they were stabbing them with knives and tortured them. When we were held inside one the palace’s gate, I recognized Alaa Hamza brotherhood leader who was going inside the palace and coming out giving orders to the members of Brotherhood on how to deal with us. He was the leader of the torture operations. He was going in the palace as if it was his own home, and it was obvious that he was getting orders from inside the palace. Former Ambassador added that he is a prosecution eyewitness in the case”. Source Tahrir channel. The video shows torture and assaults scenes, beside his testimony.

Source CTV Egypt channel, another video showing Muslim Brotherhood members and leaders, torturing Egyptian citizens inside the mosque of Etihadeya presidential palace. They were telling them to confess that they got paid to attack the palace and protest against Mursi and Muslim Brotherhood regime, otherwise they will slaughter them. The man wearing a suit talking to the tortured guy, is Alaa Hamza MB leader, he was telling the tortured man to look to the guys who were standing there, if he is not going to confess, they will beat him to death and they will slaughter him.

The following video 5/12/2012, is subtitled in English language. Contains testimony of eyewitnesses on Brotherhood crimes against protests. It also contains, Muslim Brotherhood and salafist of Musri’s supporters inciting against Christians and the church in Egypt and threatened that Mursi will lock them all in prisons and Islam is coming to destroy enemies of Islam, the son of bitches. According to their own words in the video.

Mohammed Abdel Moniem was hit by a live bullet during protests on December 4th, 2012  against Morsi’s dictatorial constitutional declaration. His injury left him paralyzed. Testimony of Mohamed’s mother and his friends. Mohamed was with his friends helping injured protesters and releasing them from Muslim Brotherhood hands, when he got shot by a sniper from the roof of one of the buildings in the presidential palace area.

Source MBC MASR: Ahmed Talkhan’s testimony: I was not participated in any protests. I just happened to be close to where the event happened. I tried to leave the area, but it was not possible from the terrifying numbers of Muslim Brotherhood who were surrounding the area. A bunch of Muslim Brothers attacked me and started beating me. I tried to tell them that I voted for Mursi and I’m not into politics, but they kept beating me. I regret that I voted for Mursi.I was dragged to the palace’s gate, then after they tortured me and others, they delivered us to the police. I also saw kids ages under 15 years old were also tortured by Muslim Brotherhood.

The following is a video showing Muslim Brotherhood and their supporters chasing and attacking a demonstrator and calling for applying Sharia law (to kill him) against him and against anyone who oppose Mohamed Morsi’s regime.

Mohamed Morsi official statement to the public on 6/12/2012 on Etihadeya crimes exposed his lies and direct involvement in killing and torturing protesters, while the case was still under investigations by Mustafa Khater , the DA office counselor who handled the case.

Etihadeya presidential palace massacre took place on 4/12/2012 and lasted to 5/12/2012. While the case was still under investigations by the District attorney office, Mohamed Mursi made an official statement on 6/12/2012 about the events and claimed that about 143 criminals who belong to the national democratic party and got paid by the opposition leaders, they were all arrested and locked in prison and will be executed for their crimes and conspiracy against the regime. Mursi added that all criminals who got arrested, confessed that they received money and weapons from some political parties to attack the presidential palace.

The next day to Mursi’s statement, Counselor Mustafa Khater issued a decision of releasing the 143 persons, because the investigations proved that they were victims of torture and arrested by Muslim Brotherhood members and leaders who held them, tortured them and forced them to confess of something they did not commit. In addition, the counselor decided to send the victims to forensic for injuries examination due to the brotherhood assaults.

The members of the general prosecutors office protested against Mursi and the general attorney interference in the judiciary and prosecutors affairs and forced him to get back in his decision against counselor Khater.

Mohamed Morsi official statement on 6/12/2012 on Etihadeya crimes exposed his lies and direct involvement in killing and torturing protesters.