Khalilah Sabra was recruited by the Muslim Brotherhood and converted from Christianity to Islam.

In May 2011, Sabra the director of the North Carolina branch of MAS’ Freedom Foundation, made a statement in an article entitled “Agreeing to Disagree About the Death of Osama Bin Laden”.  Her statement aligns more with a period of Sabra’s life in the late 1980s, when she traveled to Afghanistan with bin Laden’s predecessor, Abdullah Azzam (the founder of Al-Qaeda terrorist organization, and the God father of the Global Jihad), to provide aid to the mujahideen fighting the Soviet Union.

In her statement about Bin Laden, she said: “He was a visionary who believed in the possibility of an Islamic state in Afghanistan and the possibility that this thing might someday be,” Sabra wrote. “There was nothing wrong with that dream, even if it differs from that one that all Americans have here for themselves.”

In 1997, bin Laden described his vision of a Muslim leader “who can unite them and establish the ‘pious caliphate.’ The pious caliphate will start from Afghanistan” and spread from there.

MAS was founded as an arm of the Muslim Brotherhood in the United States and has a record of supporting alleged terrorists and terror financiers. Three of its founders were listed in a telephone book of American Muslim Brotherhood leaders. For further details, please click here. There is also a very interesting link that contains a lot of information about Khalilah Sabra and her connection to Osama Bin Laden and Abdullah Azzam the founder of Al-Qaeda and the God father of Global Jihad, please click here.

Khalilah Sabra Conversion to Islam
With the teaching of mentors Sheikh Ahmed Naufal, director of the Islamic University of Jordan, and Palestinian scholar Abdullah Azzam (the founder of Al-Qaeda terrorist organization), Sabra converted to Islam. In the late 1980s she was recruited into the Muslim Brotherhood (Ikwan Al-Muslimeen), the only American female in the organization at that time. Just for the record: Abdullah Azzam’s trademark slogan was “Jihad and the rifle alone: no negotiations, no conferences and no dialogues. Osama bin Laden was the deputy of Azzam and they both founded Al Qaeda Organization. Azzam is considered the father of global Jihad.

On 21 April 2015, she wrote a comment on my post titled :” A message from Egyptians to the US working group against Egypt.  This is not the first time I receive threats and insults from this “human rights defender”.

In addition to her threats and insults to me, she incited on killing the Egyptian president Abd ElFatah Al-Sisi. She praised Khalid Islambuli who assassinated president Sadat on 6/10/1981 and said that if her and her Muslim Brotherhood are very lucky, Sisi will face same destiny and will be assassinated like Sadat. 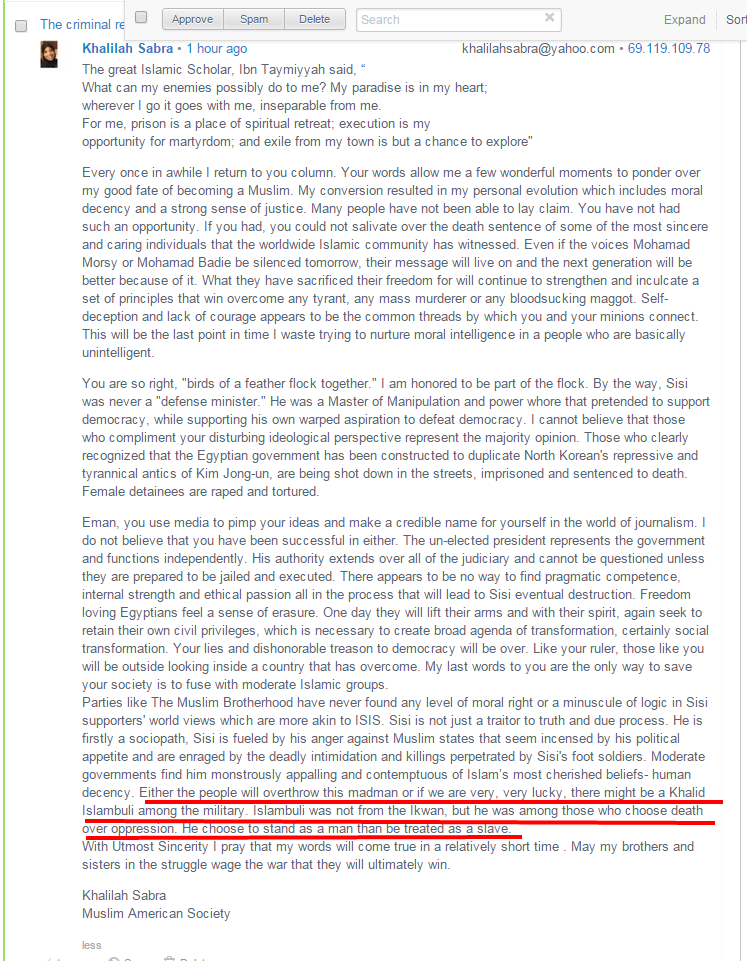 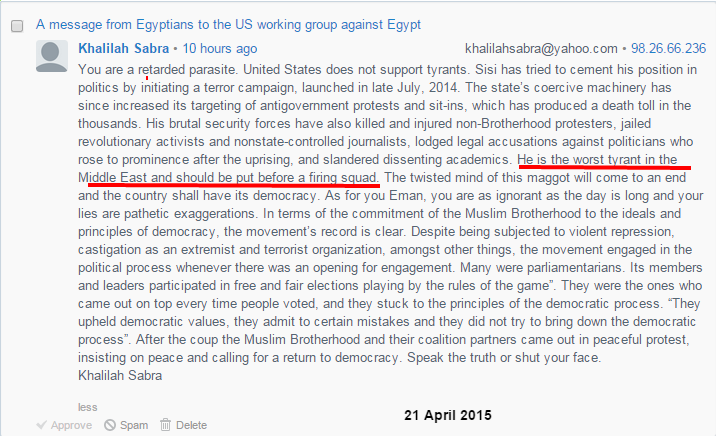 Here are other comments, I received from her on 24 May 2015. A mix of insults to me, to the Egyptian president and inciting to assassinate him like Gaddafi of Libya and he doesn’t even deserve to be killed with any mercy. Beside her insults to the Egyptian people who she called beggars. She also said that how dare Egyptians criticize Obama’s hands that are feeding them, and that Egyptians will always extend their hands to take the charity from Obama…

She wrote as well in one of her comments attempts to brainwash me, that If I show regrets about what I’m spreading in relation to Muslim Brotherhood, “They will forgive my Sins…!”  Is this another threat? that they will forgive my sins if I admit it? and who are this “We” she mentioned in her comments? Since when Khalilah Sabra or whoever she meant by “we”, they are the representatives of forgiveness or the official spokesmen of God, who are allowing or forbiding forgiveness? Is she trying to recruit me, or to kill me?! What else is she involved in, beside supporting so blindly and fiercely a terrorist organization? 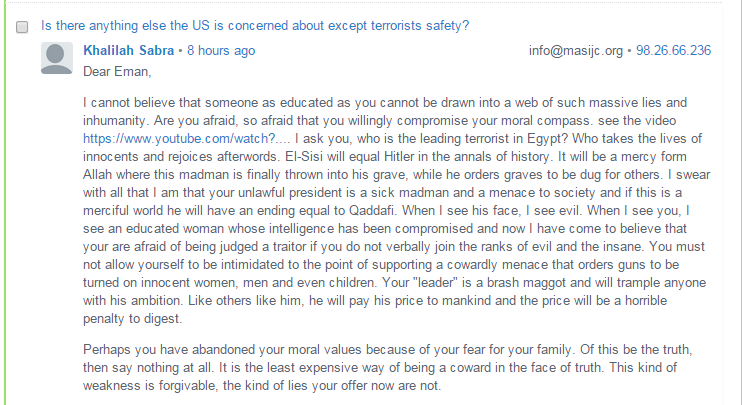 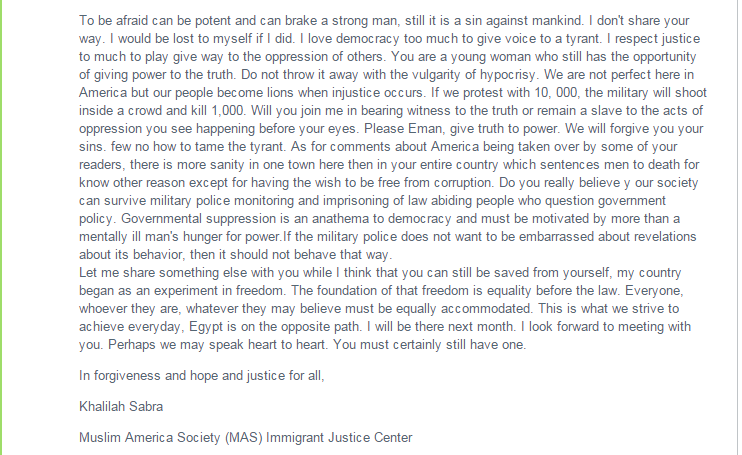 Khalilah Sabra is supposed to be a human rights defender and an employee, and her job necessitate that she doesn’t have any political opinion about anything or anyone, because in this case, she will be biased to some currents or some certain directions, and obviously, she is biased to terrorists.

How come an extremist full of hatred and anger and inciter for killing and supporter of terrorists like Khalilah Sabra received International Human Rights Award on December 12, 2013. I have no further questions or comments.