On 1/9/2014, I received an insulting comment on one of my posts, published on 26/6/2014 titled:” Cairo to Washington: The Egyptian judiciary’s independence and provisions, is none of your damn business“. In this post, I criticized and condemned the US Administration’s double standards for interfering in the Egyptian Judiciary affairs and for supporting Muslim Brotherhood terrorist organization. I also condemned the Muslim Brotherhood terror attacks and crimes against Egyptians.

This is not about the insulting comment I have received, but it’s about who sent it! The comment I received, was very insulting not just to me, but to the Egyptian president. I never trash or spam any comment, especially when it is offensive. And I always respond to such comments. Isn’t this democracy Mrs. Sabra?!

I approved the comment, but I was so angry and was not able to control my reaction, so I wrote a very bad reply to the sender. Then, when I calmed down, I deleted my angry comment and I searched for further details about the sender.

I was really surprised who the sender was! Khalilah Sabra, the executive director of Muslim American Society, immigrant Justice Center! Well, never heard her name before, till she insulted me and insulted Al-Sisi the president of the Arab Republic of Egypt!

Khalilah Sabra was recruited by the Muslim Brotherhood and converted from Christianity to Islam. The following is some brief details about her:

Conversion to Islam
With the teaching of mentors Sheikh Ahmed Naufal, director of the Islamic University of Jordan, and Palestinian scholar Abdullah Azzam, Sabra converted to Islam. In the late 1980s she was recruited into the Muslim Brotherhood (Ikwan Al-Muslimeen), the only American female in the organization at that time. Just for the record: Abdullah Azzam’s trademark slogan was “Jihad and the rifle alone: no negotiations, no conferences and no dialogues. Osama bin Laden was the deputy of Azzam  and they both founded Al Qaeda Organization. Azzam is considered the father of global Jihad.

Very interesting that the defender of human and women rights, Khalilah Sabra has been tutored on the hands of one of the founders of Al-Qaeda and partner to Osama Bin Laden.

Mrs. Khalilah Sabra used her work email instead of  her personal email, to send such offensive and insulting personal comment!

I was so surprised again when I’ve read about her history record on the MAS Immigrant Justice center website, under “our Team page”, and what tasks she is handling and representing!

Do they pay Mrs. Khalilah Sabra in MAS immigrant justice center to use her work email in insulting people for expressing their opinions? Do they pay her to insult the president of Egypt and support a terrorist organization like the Muslim Brotherhood?!

I have never claimed that I’m a  journalist, like  Mrs. Khalilah Sabra mentioned. I’m simply an Internet Marketing specialist, an Egyptian blogger and I’m not neutral, on the opposite, I’m totally and extremely biased to the national security of my country, is this a crime against humanity from Mrs. Khalilah Sabra’s point of view?!

I’m fighting terrorism with the only weapon I possess, which is what I’m writing. All the posts I’m writing whether in English or in Arabic, I’m using my rights as an Egyptian citizen which are protected by the constitution, and the International human rights Mrs Sabra is representing! But I guess the kind of human rights Mrs. Sabra is handling, do not apply on me!

I have the right to be biased and not neutral when it comes to my country’s national security. I’m a free woman, and I involve my work in politics, because I’m an Internet marketing specialist, but you are not Mrs. Sabra. How can they appoint a woman like her to stand for human rights, while she supports terrorism and insulting and accusing the president of Egypt of serious accusations without any official proofs, and this is a crime punished by the law!

Mrs. Sabra has the right to criticize the president of Egypt or disagree with his policy, but who gave her the right to insult him and insult me for not supporting a terrorist organization that she personally is supporting?!

Is this the international justice Mrs. Sabra’s representing? To insult people and accuse them based on her own point of view?! Instead of vomiting such insults Mrs. Sabra, I ask you if you really stand for justice, to provide all proofs you got, that Al-Sisi is not a legitimate president, and also to prove that he is fascist and a dictator like you mentioned. Prove it or drink a big nice glass of shut the hell up!

When I compared Mrs. Khalilah Sabra’s history record and what she stands for, to her insulting comment, I realized what kind of human and women rights she is really representing! And the speech she is using in public comparing to her personal speech on my post!

I know my duties and my rights Mrs. Sabra, I don’t need to take lessons or lectures about your fake human rights, because I’m practicing my rights and nothing and no one can stop me from doing it. I’m not the Executive director of MAS immigrant justice Mrs. Sabra who represent human rights and non discrimination, but you are. I’m biased to my country and my people, who are you biased to?!

Human rights are rights inherent to all human beings, whatever our nationality, place of residence, sex, national or ethnic origin, colour, religion, language, or any other status. We are all equally entitled to our human rights without discrimination. These rights are all interrelated, interdependent and indivisible. You Mrs. Sabra violated all my rights, when you insulted me and insulted the president of Egypt because you are practicing discrimination against others opinions who don’t suit or match your support and biased to a certain doctrine.

Thank you Mrs. Sabra for informing me that also Terrorists who slaughter people like sheep, have rights! Say this to the victims you are supposed to stand for their rights!

Truth is the real facts about something, the things that are true, the quality or state of being true, a statement or idea that is true or accepted as true. The truth is Mrs. Sabra, you insulted me because you believe that you represent the truth.

You insulted me because you can’t stand to read the truth that we are living here on a daily basis.

You and your working colleagues against Egypt, can not stand to read anything that doesn’t suit your lies and poisons you are spreading to the people you manage to brainwash and deceive.

I don’t judge people based on my own point of view, I judge them from what they say and do, and it’s all from their own mouth and not from my own pure imagination.

Mrs. Sabra, working as an executive director for MAS immigrant justice, doesn’t give you the right to act as the representative of truth or the official spokeswoman for justice or perfection or idealism.

You are a human being just like me, and you make mistakes and so do I. We are not perfect, we are not angels, you do use the toilet just like the rest of us, don’t you Mrs. Sabra? Well, Angels don’t use the toilet, do they?

You hate my opinions and you sounded like you are really angry that I exist in this world. Well, god did not create me  just to please you guys! Hate me as much as you like, I don’t have any problem with this. Since I started this blog of mine, I receive threats and hatred messages, beside the insulting messages, and I got used to it.

But what I won’t tolerate in your comments, that you insulted the president of Egypt Marshal Abd El-fatah Al-Sisi. Not because I’m a hypocrite or want to make any propaganda for him, he doesn’t really need any one to market him. His achievements speak well on his behalf.

Insulting the president of Egypt, means insulting the Egyptian people who voted for him to lead a big very important country like Egypt.

Mrs. Khalilah Sabra, Despite that your insulting comment did hurt my feelings, but I thank you very much for commenting on my post, which made you so angry to the point of insulting me. This comment of yours, gave me strength, support and energy to continue what I have started 3 years ago. I’m not a VIP Mrs. Sabra, I’m just a drop in the big ocean of Egypt’s lovers and defenders.

By the way, next time you decide to comment on a post, don’t ever use your work email this is very bad Mrs. Sabra, to involve your job with politics. Especially in your case, supporting a terrorist organization like Muslim Brotherhood.

Next time you feel angry because of a report or an article that doesn’t match with your sick minded and biased to terrorism, think twice before you start vomiting your comment, you don’t really know who is going to receive and approve your comments. 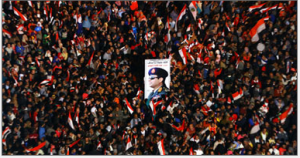 Next time, you want to insult Egypt, Egyptians and the president of Egypt, don’t do it through emails or comments, if you have the guts and you are really a free courageous woman who stand for human rights, come and visit Egypt and stand right in the heart center of Cairo’s streets, make a speech to the Egyptian people and insult their free choices and their president and then see with your own eyes and hear with your own ears what kind of truth and response you are going to receive from them!

Till you do this Mrs. representative of the truth, I believe you have a serious problem in communicating with others. In your case, don’t be scared of silence, and don’t miss again the opportunity to shut up, and whenever you feel like vomiting again, please use the toilet and not my website.