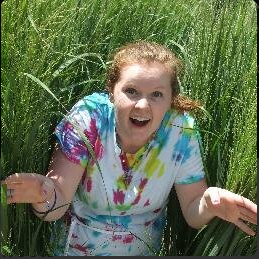 Kate Chandley, is that your face Or did your neck just throw up?

Kate Chandley invented a fantastic article published on 21/4/2014, titled “Behind the Egyptian Junta’s Iron Curtain” on HUFFINGTON POST . She didn’t make any searches or investigations before publishing this piece of morons guide, because it was much easier for her to just copy, paste and then she was ready to fart her article in our face. All links she provided were from other news agencies and Human Bribed Rights Organizations, without any investigations or deep searches.

She didn’t even bother to check the fantastic fabricated death toll she mentioned about Muslim Brothers. I guess she was watching the End of The world when she was copying and pasting.

When she wrote about the death sentence of 528 Muslim Brothers, she said just because of killing one man, they got death sentence! No Miss piggy, it wasn’t just one man! I guess those who asked you to write this article, instructed you not to bother getting the real story from the original source, so it would be easier to publish whatever serve their agenda.

Your 528 Muslim Brothers tortured and killed the deputy of Matay police station, distorted his body while he was dying.

Doctor Aly Hassan Ibrahim, Muslim Brotherhood doctor worked in general hospital of Matay, 35 years old, participated in killing the police deputy of Matay, by deliberately left him bled to death, removed the solutions from his arms and hit him with a gas cylinder in the emergency reception!

Your 528 Muslim Brothers also shot, killed and injured 16 others policemen and 4 officers in the same police station, and released arrested convicted prisoners from the police station, broke into the armory, stolen police weapons and later in the same day attacked the hospital where the injured policemen were hospitalized, so that witnesses would be eliminated!

In addition, those 528 terrorists burned the general office of the governorate in Matay, they stopped ambulances and fire trucks from reaching the place to control the fire and rescue injured citizens.

This is a video showing the deputy while he was dying, and Muslim Brothers who got convicted of torture, killing trying to distort the body of a dying man, feel free to translate it to English and hear them saying that they waned to make sure he was dead and wanted to piss on him and torture his body to make sure that he was dead.

Miss forging facts, do you know now why they got this sentence? Or do you want me to sing it for you?!

Miss Kate Bin Lying also incited the Obama’s administration against Egypt and asked Obama to insist that political dissidents be released, laws restricting public assembly be lifted, the Muslim Brotherhood be declassified as a terrorist organization and allowed to participate in all aspects of public life, and criminal investigations be launched into the unlawful use of lethal force and abuse of detainees by security officials, and US to punish Egypt by not providing any Aid, till Egypt ask for forgiveness from Mommy America and kneel with obedience!

If you support the rights of terrorists, why don’t you host them in your country? You already have a lot of them there, and I’ll remind you soon, if you still alive of course, that harboring terrorists, harvest terrorism!

Hey, Sisterhood Kate Chandley, you said they were condemned to death just for killing one man. I guess if that man was your son or father, you would still support terrorism.

The people who are addressing this article to you,are Egyptian people who revolted and risked their own lives on 30/6 against religious fascism, against terrorism, against high treason and conspiracies, against changing our 7000 years entity and civilization, against targeting and massacring minority and moderate Muslims, against slaughtering Christians and burning their homes and Churches, against dragging us to dark ages, against marriage of girls at age of 9, Against hatred and incitement speeches, against releasing terrorists elements by presidential pardon! What do you know about Egyptians sufferings and pains under Muslim Brotherhood rule, except what you have been instructed to write, Kate Bin lying?

You lost our respect when you insulted our country. We despised you, the minute you dared accusing our Brave Armed forces of these fabricated stories of yours. We considered you a disgrace, when you attacked our police forces who are getting killed every day while protecting us. Shut up this ugly mouth of yours, and if you want to learn about what is really happening in Egypt, come and visit us here in Cairo, but be aware that you might get a shot in the head, or your body gets blown-up with a planted bomb, by those terrorists you are defending fiercely.

We do not allow idiots like you, to insult our military, or describe them as mercenaries, and calling you an idiot would be an insult to all the stupid people, because in this throwing-up article of yours, you just wrote that you felt so stupid and ignorant, and It’s okay to feel what you are!