Based in Qatar, Sheikh Yusuf Al-Qaradawi serves as president of the European Council for Fatwa and Research (ECFW), he is a highly 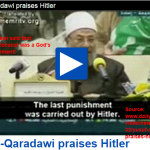 In addition, he Had issued numerous fatwas supporting Islamic extremism and denouncing Israel and the U.S. Despite, that he declared publicly, that he supported the US, Nato to invade Arab countries like Egypt, Syria and Libya to defeat the Arab armies. He also admires Hitler and has praised him publicly. (A fatwā in the Islamic faith is the term for the legal opinion or learned interpretation that a qualified jurist can give on issues pertaining to the Islamic law)

Some Activists circulated a video on social networking sites, Al-Qaradawi said that the Islamic State of Iraq and Syria (ISIS), leader Abu Bakr al-Baghdadi belonged to Muslim Brotherhood organization and he was a Muslim Brotherhood member, before he became the leader of ISIS.

Al-Qaradawi added that Abu Bakr al-Baghdadi left the Muslim Brotherhood organization because he wanted to become a leader of his own group, due to his inclination to the leadership since his youth.

He declared that Al-Qaeda, Osama Bin Laden and the current leader of Al-qaeda Alzawahiri, all these Islamist groups are within other groups, like the Islamic State of Iraq and Syria (ISIS).

Al-Qaradawi said that he knows some of the youth in Qatar and others non-Arabs, who have joined ISIS, because they are fighting for the sake of God.

They are fighting the infidels and the moderate Muslims and they are also killing non-Muslims who don’t deserve to be killed. Al-Qaradawi described all these Islamist groups acts of killings, not as crimes against humanity, but as “exaggeration” and that he personally and others are resisting this “exaggeration” committed by Islamist groups!!! 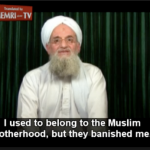 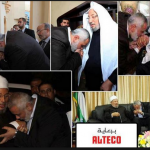 The above translation in English is what Al-Qaradawy declared in Arabic in the following video: