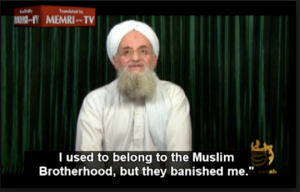 Video published on September 27, 2012, was spread through social medias activists two days ago. Video showing Ayman Al-Zawahiri the leader of Al-Qaeda Terrorists Organization confirming that Ossama Bin Laden was a Member in the Muslim Brotherhood Organization.

The above was the translation of what the Leader of Al-Qaeda said according to the following Video: