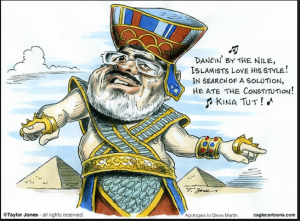 On 13/9/2013, a Judicial source in the Illegal Earning Administration announced, that Former President Mohamed Morsi’s wealth inflated in Money and Real Estates after he became a president.

The Illegal Earning Administration checked Mohamed Morsi’s family’s Financial Disclosure and declared that it is not correct based on new evidences proves the inflation of their wealth.

Investigations revealed the big difference in Morsi’s wealth while he was the leader of “Freedom and justice Party” (Brotherhood political Party), and his wealth after one year from the date he became a President.

Evidences were provided to the Illegal Earning Administration by Samir Sabry, Egyptian Lawyer, showed that Mohamed Morsi’s wealth inflated during one year of his reign:

On 10/11/2013, Colonel Sabry Yassin the Chief of the Egyptian Veterans Club revealed Documents showed the transfer of huge sum of money transferred by Ossama Mohamed Morsi (the son of Former President) from Egypt to Saudi Arabia, 5 days after his father got ousted by 30/6/2013 revolution.

The document is a letter which was issued from Alragehy Bank in Saudi Arabia dated 10/7/2013 to Altawheed company for exchange 271 street 26/7 Zamalek Cairo (one of the Egyptian Exchange Companies) demanding the exchange company to advise and update the Saudi bank about Mr. Ossama Morsi’s request in relation to the transfer of the following amounts which was requested on 8/7/2013:

The following screenshot is the original document which was published by the Egyptian Veterans, as the details and translation mentioned above: 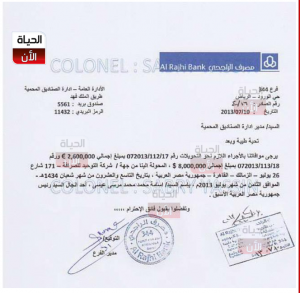 The source of information: http://alhayahalaan.com/news/5/20094/