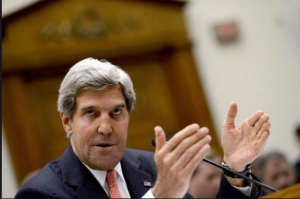 On the 3rd of November 2013, John Kerry visited Egypt, praised the Egyptian government and declared that Egypt is going on the right path to Democracy.

While, On the 17th of January 2014, John Kerry said that It’s not one vote that determines a democracy. The United States urges the interim Egyptian government to take steps towards reconciliation. Democracy is more than any one referendum or election. US have consistently expressed their serious concern about the leading up to the referendum, just as US expressed their concerns about the dangerous path Egypt’s elected government had chosen in the year that lead to 2013’s turbulence. The absence of a fully inclusive process in drafting and debating the constitution ahead of the referendum, and procedural violations during the referendum, such as lack of ballot secrecy.

[symple_testimonial by=”Abraham Lincoln“]Any people anywhere, being inclined and having the power, have the right to rise up, and shake off the existing government, and form a new one that suits them better. This is a most valuable – a most sacred right – a right, which we hope and believe, is to liberate the world. Said Abraham Lincoln.[/symple_testimonial]

John Bin Kerry, If Abraham Lincoln was alive he was going to tell you that you have the right to remain silent and anything you say can and will be used against you!

Egyptians did exactly what Abraham Lincoln said. They shook off the Muslim Brotherhood fascist government, formed a new one that suits them better and liberated not just Egypt, but 30/6 was a wake up call to the world and especially America to liberate themselves from the terrorism camp inside their own territory, before it is too late!

Take a good look on the 2014 and the 2012 constitutional referendum results breakdown, if all you came up with, is criticizing and attacking Egypt and spread lies of this fake support to Egyptians Mr. Kerry, and you didn’t even congratulate Egyptians with one single poor word on the success achieved through the positive voting, then I’m gladly informing you that your hallucination disease is a hopeless case!

John Kerry you are a blatant liar and a hypocrite. No John Bin Kerry, you did not express any worries or any concerns when Muslim Brothers violated our rights and terrorized us. You are a big tall liar John Kerry, because US did not condemn any of the Muslim Brothers massacres against Egyptians. US started to punish Egypt after the 30th of June revolt, and not when Muslim Brothers were in power.

Really Mr. Kerry, now you are saying that it’s not one vote that determines a democracy! now you are claiming that democracy is more than any one referendum or election! What happened to the broken record of “The legitimate  democratically elected Mohamed Morsi and the elected government”? Kerry, are you really addressing this speech to us!? Muslim Brotherhood took the Egyptian community for granted and controlled all Egypt’s joints by terrorizing and fascism and you guys ignored all their crimes and violations against us, and now you are talking about what and what isn’t representing democracy!

Let me refresh your memory a little bit Mr. Kerry. In 2012 when your Muslim Brothers were in power, the 2012 constitution was formed only by Islamist Extremist currents. Other currents withdrew when they realized that their role in the committee was just a hanged picture on the wall and they were not allowed to represent the different currents in the Egyptian community. The articles of 2012 constitution were dragging Egypt to the dark ages path! You Kerry and the US administration congratulated Mohamed Morsi and supported them against our will, and totally ignored their blatant violations!

International observers in 2012 were largely absent from polling stations due to time and bureaucratic constraints. The Carter Center refused to monitor the referendum process, citing the short preparation period and inability to comprehensively asses the referendum process in time! Muslim Brothers allowed Egyptians abroad to vote by emails and mails and opened the doors for votes forgery. This was not allowed  in 2014 constitution.

In addition, Numerous allegations of fraud and vote rigging in 2012 were made by the opposition National Salvation Front and many civil society groups, and no investigations were allowed at this time because Mr. Kerry’s  Muslim Brothers were in power. The majority of judges refused to participate in observing the disgraceful constitution of Brotherhood, except for some corrupted judges, their loyalty was to Brotherhood and not to the oath of loyalty to their own country. Were you concerned then John Bin lying? No, you weren’t.

Mr. Kerry totally ignored the reports of International observers who did attend and monitor the voting process of 2014. The Chief of International observers delegate declared that the process and procedures during the voting on the 2014 constitution were according to the International rules and regulations.The few violations took pace did not affect the transparent operation of voting. He also confirmed that the Egyptian authorities fulfilled their commitments in organizing and securing the whole process and the existence of police and military securing the committees did not bother the observers and the majority of Egyptian people have a strong desire in moving forward to stability and peace.

Ms Tera Dahl, American International observer on the 2014 constitution, she said that Egyptians are looking for a better future. The foreign media are misleading. Egyptians were celebrating the referendum on the constitution, while the foreign media were talking about fears and worries about the voting process. The 30th of June 2013 revolution was bigger than the 25th Of Jan 2011. Washington post and New York Times are not publishing what is happening in reality in Egypt. The foreign media did not mention anything about the Muslim Brotherhood acts of violence and terror during the voting process.

Ms Tera Dahl was very honest when she said that it is like what happened in the United States after the Independence and what followed in the US history, the process was not perfect, but she eye-witnessed many Egyptians doing their utmost and US should help Egyptians to achieve their goal in having a safe and a free country.

Egyptians challenged terror and Muslim Brotherhood threats and attempts to ruin the voting and the Egyptian authorities fulfilled their commitments regarding securing the voting process and the voters and they have proven wrong the foreign media and human rights organizations false claims that Egypt has a poor weak security conditions. On the other hand, international news agencies did not say a word about the attempts of  Muslim Brothers terrorists to ruin the voting!

Did Mr. Kerry condemn any violations or forgery which took place in relation to the 2012 constitution? No he didn’t. Did Obama’s administration or their politicized medias condemn any? No they didn’t, foreign media just mentioned a few lines for their readers kind information only.

I’m not claiming that Egypt is doing everything perfectly, but we are doing our best, we are trying to do all what we can the right way and we do learn from our mistakes. We are struggling to move forward, we are fighting for survival, we are fighting a pure black evil terrorism, we want to work hard to see Egypt one day a great country in all aspects, instead of helping us to move forward, and instead of encouraging us to continue in the right path we have chosen away from fascism and dictatorship, The US Administration insist on challenging our will and wants to force their own agenda on the Egyptian people.

Egyptians feel sick every time they hear any US officials talk about morals, freedom and democracy sponsored by the US. And it is disgusting also to hear these US officials concerned about the Egyptian people and their future. Don’t you guys feel any shame or embarrassment from all these blatant lies of yours?!

The US administration only cares for its own interests even if these interests are going to participate in shedding the blood of humanity. Stop lying and stop pretending because we read history Mr. Kerry! Soon, the whole world will find out what kind of dirty deals were going on between the US administration, the Muslim Brotherhood and Al Qaeda, Qatar and Turkey against the Egyptian people, John Bin Lying Kerry claimed that the US care for them.

If America wants to get rid of terrorism it is not going to happen by exporting it to the Middle East region Mr. Kerry, but to stop participating in it! It is not true that the Middle East is exporting terrorism to the US or any other country. Terrorism is not a part of opposition current participating in political life and disagreeing with the regime.

Terrorism is the use of fear and acts of violence in order to intimidate societies or governments. Many different types of social or political organisations might use terrorism to try to achieve their goals, be aware America, you have many of these social and political organizations in the USA. People who do terrorism are called terrorists Mr. Kerry. And wake up America before it’s too late.