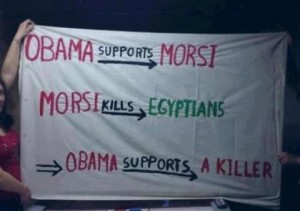 USA claimed that they will always support the Egyptian’s will and will never interfere in Egyptian people’s choices! Meantime, US still support the Brotherhood, despite that the choice of million of Egyptians on 30/6/2013, was to get the Brotherhood Regime down!

Why the USA supported the 25th of January and did not support the 30th of June Revolution, despite their claims, that they will always support Egyptian people’s choices? And why the USA gave up on Mobarak’s Regime, but they certainly, did not give up on Brotherhood regime?!

I really wonder here, if the Egyptians who participated on the 30th of June 2013 revolution were just 4 million like the participants number of the 25th of January 2011, and 30/6 revolution was totally blessed by the United States Of America and their allies, Like the  25th of Jan enjoyed their blessings, would they call it a coup then!?

I’m sure that if the participants of 30/6  were just 4 million like the 25th of Jan, We would have never succeeded in getting the Brotherhood regime down! How can any one consider 4 million participants in a revolution, really represents the total of 87 million Egyptian population?! Despite that Many countries and many International News Medias are still calling more than 30 Million Egyptian participants on 30/6/2013 revolution, “a Coup“!  But they have never described 4 Million of Participants on 25/1/2011 out of 87 Million total population, “A Coup“!

It’s not logic at all and doesn’t make any sense, that US supported 4 million of Egyptians on the 25th of January and now US  is challenging and standing against more than 30 Million of Egyptians will and choice! That’s insane! but in the meantime, it is a fact and a reality!

The US did not ask to visit Mobarak when he was in jail, not even once, and never asked the Egyptian Authorities to release Mobarak and his regime from jail! US was encouraging that justice takes place in relation to any crime or corruption that happened during Mobarak’s regime. And even if Mobarak was released and it was not proven that he was personally involved in any crime or direct corruption, but at the end he was the President of Egypt, and being the president, makes him totally responsible for any crime or corruption which happened during his reign.

So, how come Mohamed Morsi, who was also the President of Egypt,  is not responsible for the Crimes and corruption which happened during his reign, even if we are going to assume that he was not directly involved in crimes and corruption?! Why the US is giving Mohamed Morsi and his regime an exception from his responsibilities as a President???!!! This is also insane!

On the other hand, US politicians and the US administration’s messengers of Love and Affection, were visiting Mohamed Morsi and Muslim Brotherhood Organization regularly after the 3rd of July, 2013.  I don’t think that all those US messengers regular visits to Brotherhood and Morsi after their ouster, were just because US wanted to make sure that their fridges were full of good quality food while being in prison!

Why would the US insist on releasing Mohamed Morsi and His Brotherhood fellows, despite that they know very well, that Mohamed Morsi and the Brotherhood leaders are in jail because they will be trialed for treason, disloyalty, espionage, corruption, and crimes against the whole Community and against all the State Institutions, including massacres against Christians! Morsi in particular is facing more than 10 serious charges and the first case trial will start on 4/11/2013.

Can the USA answer that question: Why they did not ask or insist on releasing Mobarak and his regime from jail, and they asked and still insisting on releasing Morsi and his brotherhood fellows from jail?!

The USA and Israel were shocked by the 30/6/2013 revolution, because 30/6 revolution did not only take down the Brotherhood dream of building Fascist Empire to dominate the whole world, proceeding from Egypt, but it also ruined the whole project and Agenda of  the USA, in relation to the whole Middle East Area, which is again the issue of History is repeating it self, about The USA’s control and domination on the whole World.

USA thought wrongly, that the more pressure they put on the Egyptian State, by using their twisting arms policy towards Egypt, specially after cutting Military Aid, the more they will put the Egyptian State to kneel economically and that pressure might get Egypt to go back again to the US Administration’s Cuddling, as long as Egypt show some obedience, to the most powerful country in the whole world!

The Collapse of Brotherhood regime in Egypt, was a big loss to the US and Israel, because Muslim Brotherhood, specially after Morsi became the President of Egypt, the first thing Ousted President Morsi did, to prove his obedience and loyalty to the Policeman of the world who helped great deal the Muslim Brotherhood in reaching Power in Egypt.  Morsi established the reconciliation between Hamas and Israel, while he hasn’t done anything in relation to the internal the reconciliation in Egypt, which was seriously needed at that specific time!

After that reconciliation between Hamas and Israel, which was guaranteed by Mohamed Morsi, who played the role of mediator, and also was highly welcomed by Israel and USA, not even once we heard any breaking news about Hamas launching any attack against Israel, and not even once we heard about any of Hamas or their Militias’s missiles attacking Israel!!! Since Mohamed Morsi became the president of Egypt and made that reconciliation between Israel and Hamas, Israel and Hamas were happily married and lived happily ever after! 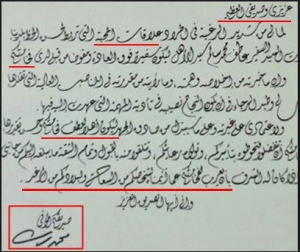 Letter dated 19/7/2012, addressed from Mohamed Morsi to Peres describing him as his great dear friend, and Morsi is his loyal friend

Mohamed Morsi was exchanging letters with Israeli President Shimon Peres, which was fine. But what was not fine at all, that the Egyptian Presidency institution in Egypt on the 31th July 2012, denied a specific letter that was addressed from Mohamed Morsi president of Egypt to Israeli President Shimon Peres on 19/7/2012; Despite that the letter was publicly published on Haaretz by the Israeli responsible on 31/7/2012! Later on, after Israel confirmed that the letter was genuine and real, the Egyptian presidency couldn’t deny it! 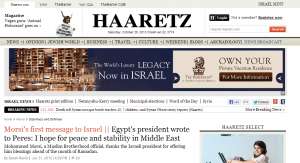 Why Mohamed Morsi denied sending that letter to the president of Israel? what did the letter contain, that Brotherhood and Morsi ousted President, wanted to hide from the world, specially the Islamic communities and his personal loyalists and supporters!

My Dear and Great Friend,

Due to my utmost desire and the necessity of developing the loving relations which luckily attach our both countries,I have chosen Ambassador Atef Mohamed Salem to be the ambassador of Egypt in the State of Israel and he is authorized by me for your excellency. I have chosen him to do the mission I charge him of, and I know that he will do his utmost with honest efforts, so he will get your excellency kindness great estimate.
I’m asking your excellency to accept him and surround him with your support and care and to be sure of everything he will inform you on my behalf, and i have the honor to express my wishes of happiness to your excellency and prosperity to your country.

Mohamed Morsi
President of the Arab Republic Of Egypt

My God, that’s really a hilarious letter, I guess the only thing Mohamed Morsi missed to write in that letter, was to propose to Peres, and ask if his excellency Peres accepts to marry Mohamed Morsi in order for the both of them to live happily ever after!

That was Mohamed Morsi, the President of Egypt who was totally fond of his dear great excellency Israeli President! Does that mean, Morsi and the Brotherhood really love and respect Jews!?

That following video dated 23/9/2010 is telling the total opposite of that love relationship between the representative of Muslim Brotherhood, Mohamed Morsi  and Israel. Mohamed Morsi Brotherhood leader and the candidate of Brotherhood for the Egyptian Presidency, on 23/9/2010, describing Jews as Zionists, Pigs and Monkeys, asked Muslim to fight them and said that negotiating with Zionists is a waste of time, and he also said that Muslim will never have peace with the grandsons of pigs and monkeys; While on 19/7/2012 Mohamed Morsi was proposing to Israel! 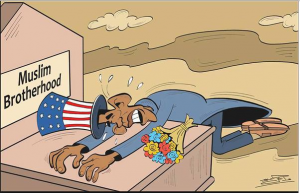 The United States are supporting The Muslim Brotherhood, because they still think that Muslim Brotherhood represent an excellent example of the Political domesticated and obedient Islam, and this is actually what they have lost from their own point of View after 30/6/2013 revolution.

US also thought that within the regime of Muslim Brotherhood in Egypt, Israel security will be guaranteed more than it was during Morak’s regime, because Muslim Brotherhood were more obedient and smoother and subordinating in its dealings with the West. That was not a secret or a point of view, that is a fact, which we all lived during the Muslim Brotherhood regime.

USA is challenging the will of Million of Egyptians who decided to get their National Independence and freedom on 30/6/2013, away from the domination of USA and Europe, and that’s considered by the United States, a rebellion movement from a  country like Egypt against a dominating country like the USA.

USA and Israel have lost a great deal, by the overthrow of Muslim Brotherhood regime, and that regime and Organization have never believed in the word “homeland country”, but they always believe and even announced publicly that they believe in the “no borders country” or the UN system which does not recognize any borders, just like the regime of Empire, which was the dream of MB to dominate the world.

The following from the Lord of the Rings comes to mind:”One Ring to rule them all, One ring to find them; One ring to bring them all and in the darkness bind them”.