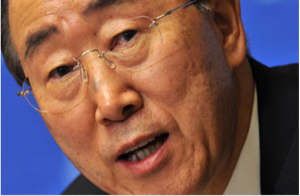 There is an old saying in Egypt “Kill the victim, pay condolences to his family and then walk in his funeral”.

Ban Ki-Moon, Mr. Secretary General of Obama’s Administration and the Head of The Untied Nations of America, Egyptian families victims don’t accept your condolences for the last terror acts which caused the death of 17 police individuals and wounded many others.

On the 24th of December 2013, The Secretary-General of Obama, Ban Ki-Moon said that he was  seriously concerned about recent developments in Egypt. He condemned the deadly terrorist attack on the police headquarters in Mansoura City.

That was obviously not a condolences statement because the rest of it was actually something else!

According to his statement, Ban Ki-Moon  was troubled by the deteriorating human rights situation and political climate in Egypt under the controversial new law regulating protests. Three  prominent democracy and human rights activists were sentenced to three years in prison and Egyptian authorities raided a human rights organization.

The Secretary-General viewed these actions as contrary to the spirit of  Egypt’s revolution nearly three years ago. Egyptian authorities have reiterated their commitment to  holding a referendum on the proposed constitution, followed by  parliamentary and presidential elections.

Ban Ki-Moon continued to underscore the need for  political inclusion and due process for those in detention. He  is fully committed  to supporting the Egyptian people’s goal of a stable, democratic, prosperous Egypt.

Ban Ki-Moon secretary of Obama, Egyptians didn’t hear a word about you being troubled for the deteriorating human rights situation when Brotherhood were in power, they actually allowed the marriage of children in the age of 10 in their constitution!

You were not troubled Mr. South Korean at the time rape and sexual assault against female protesters was approved by the Muslim brother’s President of the Senate (Shura board) and several Muslim brothers clerics! You never called spade a spade!

You certainly were fine with Muslim brothers actively support female circumcision and they were making it for 30 Egyptian pounds per case!

When sisterhood were cutting young girls hair in the subways and in schools for not wearing veils, it didn’t bother you!

You were absolutely fine when verbal and physical persecution of Christians took a steady rising curve when Brotherhood were in power and especially after 30/6 revolution. You didn’t mind when Hate messages against non-Muslims have been hold almost 24/24 hours on the Brotherhood Islamic media. You were ok when Muslim Brotherhood and their supporters were marking Christians homes as “Atheist and pigs”. You were not troubled when Brotherhood burnt more than 73 Churches all over Egypt! You never called spade a spade!

You were not disturbed when Morsi called for the establishment of the Islamic caliphate! You South Korean did not condemn Mohamed Elbeltagy Brotherhood leader when he threatened Christians by bloodbath/shed, before and after 30/6 revolution! You were silent, when Morsi and his Extremists clerics publicly addressed hate speeches and incited their followers to kill Shiites in Syria, and cut the throats of Egyptian protesters against Brotherhood regime!

While US and EU were rewarding Brotherhood regime with funds and supports, You didn’t mind that Morsi never took any measures to stop local hateful and incitement messages and speeches, which were not addressed just by his Brothers and supporters but also by Morsi personally against his own people!

How dare you South Korean attacking the political climate in Egypt and the new law regulating protests! Western didn’t even criticize Morsi when he announced the curfew and state of emergency! Where were you by the way when Muslim Brothers and their supporters terrorized the constitutional court judges!? Haven’t heard any condemning from your part, when Muslim Brothers carried Osama Bin Laden and Al-Qaeda Flag and attacked the National Security, Intelligence and ministry of defense Buildings!

You did not object Brotherhood practices when they committed Etihadeya presidential Palace massacre in December 2012 against peaceful protesters! On the contrary, you are constantly claiming that Muslim Brothers are innocent without any evidence on their crimes which according to you guys are just political motives and framed by the Egyptian State!

You Ban Ki-Moon have no right to interfere in the Egyptian Internal affairs. And since you are putting your nose in our affairs, I’m sure you know nothing about the US and UK protests laws. Because if you do, you should have realized that their protests Laws are more strict than ours!

Did you panic when Morsi gave presidential pardon to more than 1000 dangerous terrorists elements and released them from Jails and gave them full freedom to move in the country?! You were there weren’t you when Morsi gave himself full authorities above the law and got full political immunity covered by his constitution!

I didn’t know that the United Nations actually support those who betray their own countries and accept foreign funds to get down the Regime under “Applying Democracy claim”?! I surely didn’t know that the spirit of Egypt’s 25th of Jan required receiving foreign funds from corrupted businessmen belonged to Mubarak’s regime, that you guys praised taking his regime down?

After publishing the recordings which prove these activists betrayed their own country, the US and their politicized news agencies claimed that it is not legal to spy on people’s calls! Yes, tell me about spying, especially the US who is spying on the whole world!

Tell me Ban Ki-Moon, how much funds should I accept to apply democracy in my own country from foreign Embassies and foreign training centers to be able to get the regime down and make all Egyptians live happily ever after? Does South Korea reward those who don’t respect the law, incite and participate in damaging private and public properties under the freedom of speech claim?!

You Ban Ki-Moon the Secretary-General of the United Nations who is much more Secretary than a General reminding Egyptian officials that freedom of assembly and expression are essential elements for credible elections?! You did not react when Muslim Brothers forged the presidential elections and their militias threatened and stopped many Egyptians especially Christians from voting to Morsi’s rival candidate!

You Ban Ki-Moon the nowhere man are lecturing Egyptians on how to handle our own country’s transition!? Were you dead when Morsi was dividing the country and was spreading hatred and violence and totally ignored to listen to the voice of wisdom for reconciliation and unity among all Egyptians who were suffering from division!?

Is your mission and job in the United Nations to support terrorists and fascist regime and lecturing the Egyptian State on how to run process for those in detention?!

Egyptians reject your support and we surely don’t need your faked democracy which is based on barefaced double standard policy!

What is the United Nations job Ban Ki-Moon?

It is to find solutions to political crisis. Well, the solutions come from other sides than the United Nations!

The United Nations used to do some jobs before, but the United States of America made their jobs nothing but a big illusion!

Ban Ki-Moon, you are among the worst secretaries general in the United Nations history! 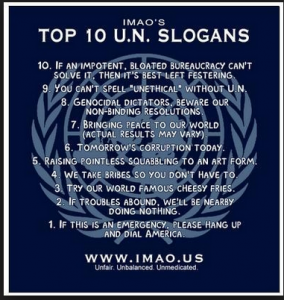 You are certainly the nowhere man like Foreign Policy described you. The nowhere man at a time when global leadership was urgently needed, when climate change and international terrorism might seem to require some or any response, You were then been trotting the globe collecting honorary degrees, issuing utterly forgettable statements, and generally frittering away any influence you might command. You become a kind of accidental tourist, a dilettante on the international stage.