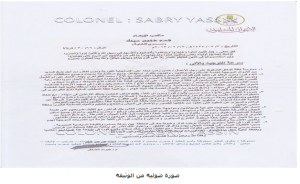 Photocopy of the document

On the 8th of November 2013, another new Document revealed by Yasser Albehery, the Official Spokesman of the Egyptian Veterans. Document was exclusively published by Al-Bawaba Newspaper.

The official spokesman informed Al-Bawaba Newspaper, that the Egyptian Veterans will continue on revealing more Documents and very important recordings, which will reveal all those who are involved in terrors acts committed on the Egyptian Territory, so everybody will know that those who were messing up with the national security of Egypt, will be prosecuted by the Law.

The document issued by the Muslim Brotherhood Organisation Headquarter in Moqatam, Cairo, dated 13/2/2013 and signed by Khairat Al-Shater, the deputy of The Chief of Muslim Brotherhood Organization in Egypt, addressing instructions to execute terror acts in Sinai, which started earlier in 2013, which was targeting Egyptian and Military Check points and also terror acts against Churches in Egypt. The document dated 13/2/2013, contain many instructions and work missions to Brotherhood members and leaders.

Instructions of practicing all kinds of pressures on the Famous Egyptian Businessman, Hassan Rateb (owner of Al-Mehwar Agency News Channel), in order to force him to respond immediately without any discussions, to pump more money for serving the Islamist Militants “Mujaheddin” in Sinai, By threatening him of targeting all his investments in Sinai and all his investments in all the Egyptians Governorates.

Instructions of getting in contact with Mohamed Alzawahiri in Egypt (the Brother of Ayman Alzawahiri, the leader of Al-Qaeda Organization), asking him to unit all Islamist Militants elements in Egypt, Palestine and Syria to work under Islam’s banner (as described in the document) and Brotherhood Safwat Hegazy to handle that matter under Mohamed Beltagy Brotherhood leadership. And Khaled Salah (Famous Egyptian Journalist, writer and Program host) to open conversations circles with the Militants Groups in the world.

Other instructions addressed to Mohamed Morsi (ousted Brotherhood President), to hurry up in raising the File of Sinai Lands possession, and to do his best in containing, dominating and to gain Sinai’s people friendliness by regular held meetings in the Presidential Palace with the heads and leaders of Tribes and the head and leaders of Big leaders and families in Sinai, and to sink them with Glamorous promises of development in Sinai, and also to promise them that all their demands will be met by the President.

Other instructions of confronting Military and Police Elements in all kinds of their Check points in Sinai, whether moving or fixed ones with intensive Jihads Operations (Islamist Militants) Also to target the Police Stations in Al-Arish City and Rafah City.

In addition to attacking churches and assassinations of Christians Symbols. Meantime, distracting and deluding the People that there is a big tension exist between Egypt and Hamas Organization In Gaza Strip, because of the Egyptian Military’s decision of destroying the Tunnels and shutting them down. This Scenario can be handled to Khaled Salah who will be able to publish this scenario intensively through the media, till people will believe it. 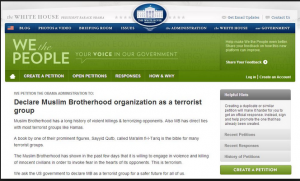