Below that text, I gathered some videos and images that show the crimes of Mohamed Morsi and Brotherhood against Egyptians, killing women, men and children in the streets with cold blood, killing Muslims and Christians and priests, burning churches and destroying them in different cities in Egypt using machine guns, bombs, knives, swords and throwing children from the 12 floor. Brotherhood  are also using military and police uniforms going in different areas all over the countries shooting people and spreading rumors that there are many police officers and military officers who joined Brotherhood against those who supported the 30th of June Revolution.

Brotherhood are killing us as a punishment for our peaceful demonstrations and our fair demands in decent living, reforms and earlier presidential elections and stop the brotherhood terror against Egyptians and stop the brotherhood who are acting above the law and trying their best to destroy and divide the country to be able to have full control on it, and all this terror by the brotherhood against civilians is  supported by Obama’s administrations and the USA, because there is an agreement with Israel and Hamas and the brotherhood and the USA, to give Sinai to Palestinians of Gaza and get rid of  the Palestinians cause forever and in return, since Morsi got into power he made a commitment with Hamas that they will not resist Israel occupation. The brotherhood are supported by USA to serve USA and Israel interests in the middle east, including executing the creative chaos project in the middle east by diving all the Arab countries to provinces and distract the Arabs into internal civil wars and conflicts under the rule of Islamist terrorists and extremists. That is the plan of the USA after the 9/11 to use Islamist  terrorists and extremists to fight with moderate Islamist. In other words: fight terrorism by using Islamist against Islamist.

On the 30 of June 2013 till the 3rd of July 2013 more than 33 million Egyptians demonstrated all over Egypt asking Mohamed Morsi to make earlier presidential elections due to the oppression, terror and the worst economical status ever in all sectors and fields, which  took place since brotherhood got into power.

Instead of meeting with Egyptians demands, Mohamed Morsi and his brotherhood terrorists refused to do any reforms or earlier elections and threatened with civil war and spreading Egyptian blood all over the country if the demonstrations of 30 of june 2013 will take place.

Since the 30 of June, the brotherhood are shooting and slaughtering people with cold blood in the streets all over the country and they are using Syrians, Palestinians, Hamas and other foreign Gihad Terrorists carrying AlQaeda flags whom they managed to get through the borders, some of them they are professional snipers, others they just give them money and weapons and paying a lot of money just to kill people.

The USA is supporting the brotherhood violence and terror against Egyptians, claiming that what happened in Egypt was a military coup and that’s the same claim of brotherhood in order to get back the brotherhood into power again so they can slaughter us under USA sponsorship.

Brotherhood are thousands camping in one of the areas in Cairo – Nasr City and they are sending videos and signals to the USA claiming that who went out against Morsi are just a couple of thousands on the 30th of June till the 3rd of July and that the brotherhood will turn the situation to their favor by using terror against Egyptians in order to get the support of USA back to ruling.

The following are the images and video of the peaceful great revolution of 30th of June 2013 till the 3rd of july 2013, more than 33 millions Egyptians all over the country – does it look to the world that those images and video were a military coup! 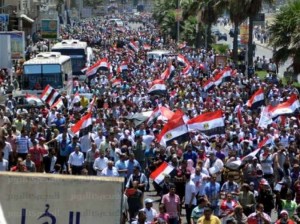 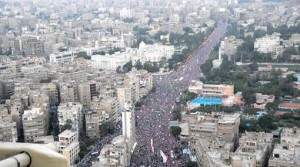 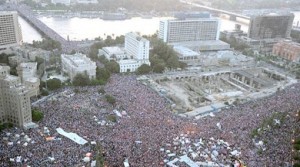 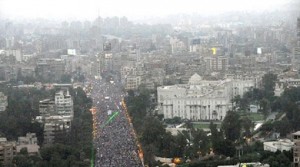 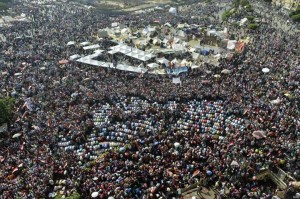 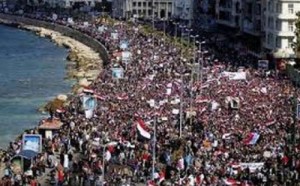 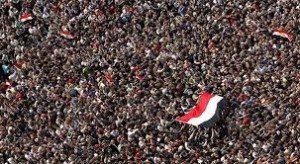 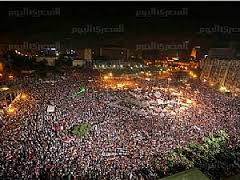 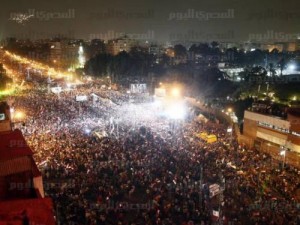 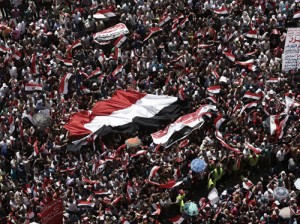 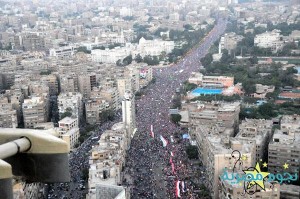 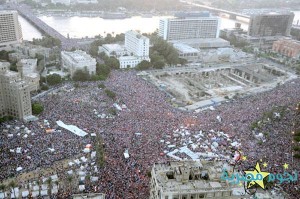 Funeral of 12 martyrs from the Manial Cairo region, killed on 6/7/2013 during an attack by the Brotherhood militias,  people participating in the funeral chanted : “there is no god but Allah, the Muslim Brotherhood are the enemies of God.”

The Brotherhood militias took the rooftops of buildings and also the roof top of the Mosque of Salah al-Din, and start shooting randomly at civilians in the streets using machine guns, resulting in a fall of 12 martyrs and hundreds injured.

In the following video eyewitnesses are telling how it happened and some of the shooting scenes by brotherhood terrorists against Egyptians civilians.

Brotherhood terrorists shot one of their demonstrators at his head from the back and accused the military republican guards of shooting him, while the shot came from where the demonstrators of Brotherhood where standing.

Videos of Brotherhood throwing children from the roofs of building and killing people with guns in Alexandria. After they throw them, they were torturing their bodies. This is exactly what Hamas did to Palestinians who support Abu Mazen Plalestinian president of Fath Organization some years ago.

After Morsi and the brotherhood supported killing Muslims who belongs to Shiites in Syria, brotherhood and their terrorists extremists, killed and tortured four Shiites in Egypt.

Video of Brotherhood attack women and civilians in Almansoura City

Brotherhood are shooting and attacking demonstrators and police in Alexandria city

Morsi supporters burn a church in Minya governorate in Upper Egypt – 4th of July 2013
Directed Minya Security Directorate, on Wednesday evening, power to the village of «Dga», of the Center for Deir Mawas South Minya, after receiving a distress Minya Diocese of Catholic Copts, the exposure of a church and a priest break attack.

Dozens of supporters of President isolated, Mohamed Morsi, surrounded the church building belonging to the Church «St. George» Village «Dga», of the Center for Deir Mawas south of Minya, and burned it after looting its contents, and smuggled the pastor across surfaces buildings.

Church sources said that Father Youssef Ayoub, pastor of the church, was surprised by violent percussion sounds outside church break in which they reside and adjoins the church, attackers broke into the break and looting its contents and then set a fire.

On the 1st of July 2013 Associate Investigation, “Boulak El Dakrour”: snipers, “supporters of the president,” standing up in the roofs of Cairo University … We need the intervention of the armed forces

He explained that after the president’s speech, supporters fired Cairo University circumference fire randomly at residents, followed by fire on the officers, and continued: “The security situation surroundings Cairo University needs the intervention of the armed forces.” This bloody event, left 13 killed and hundreds seriously injured.

The above mentioned are not all the assassinations and terrorism acts against military officers and police officers and civilians, there are more every minute…I’m sure seeing all this violence is hurting those who have seen it, well that’s what we are living daily due to USA support to Brotherhood terrorists in Egypt.

What happened in Egypt is not a military coup, it is a revolution against terror and oppression. All of you who pay taxes whether in the United States of America or in anywhere in this world, know that if you keep silent about this terror against Egyptians Civilians that is supported by your governments and administrations, you are responsible of the killing of innocent people too.

If you are claiming all the time that you support human rights all over the world, know that Brotherhood who are supported by your political regimes and governments, are assassinating Civilians with cold blood because we made a revolution asking for our human rights.