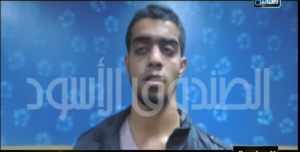 On 24/3/2014, Albawaba newspaper, Chief Editor Abd Elrehim Aly, published a video of Abu Obaida Muslim Brotherhood element, who admitted joining the Muslim Brotherhood Organization and was receiving instructions from the organization to target police, army individuals and their families. He also confessed eye-witnessing torture of civilians in Rabaa and Nahda squares (MB armed sits-in, disengaged on 14/8/2013). And exploiting Children in violent protests and in surveying police elements residences and families.

He said that his group also had similar activity in Sharkia city of targeting some of the security checkpoints and police centers. He was also charged of hiring children to participate in MB supporters violent protests and surveying police and military residences, and used children in surveying families of police individuals.

He confirmed that Muslim Brotherhood were heavily armed in both squares sits-in and he eye-witnessed MB arms and ammunition like machine guns, the day of the disengagement of Rabaa sit-in.

He also saw weapons stored in Rabaa’s kitchen in the square. He mentioned that he knew and met top leaders from the brotherhood organization and their political party, because he was responsible for Rabaa’s stage and leading some of the demonstrators in violent protests.

He added that the day of the disengagement, he saw a military vehicle entered the square, and Muslim Brothers took over the vehicle after they shot and injured military soldiers and stole their weapons.

Ibrahim told investigators that the purpose of surveying police officers residences, was to bring complete information about their families, whether they have kids or not, what time they leave home and when they get back from work. He added that before he got arrested, Abu Obaida told him and others in the group that he was going to take them in an Area in Bilbis by the mountains, to get some training on how to use weapons and grenades to attack and kill police and military individuals.