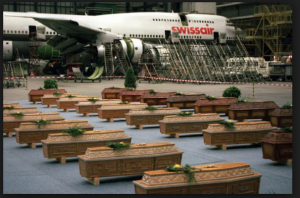 Images of the slaughtered tourists in coffins Luxor Egypt 1997 Massacre

This post was published by Maha Bahnassy on face book. It is a very important post. I copied her description and details of the event and added some other details to explain further in addition to her text and video.

October, 1997 the world was shocked to the bone when the news about shooting and slaughtering 58 tourists at the Temple of Queen Hatsheput in Luxor- Egypt… Most of the victims were from Switzerland, Germany, and the UK… Women, men and children and also a tour of Japanese honeymooners got shot and then slaughtered with no mercy. 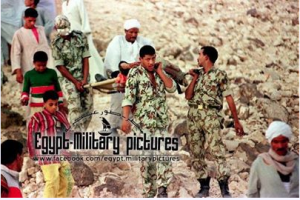 After all the investigations and police hard work, they discovered that a group of Jihady Muslim terrorists were responsible for that Massacre. Some were killed during the arrest because they were shooting back at the police forces. But the leaders of that terrorism massacres who planned it and give orders for executing it, were arrested and sentenced for life imprisonment.

I believe what you are going to read now will shock you! Our ousted president Morsy has earlier made special arrangements to set him free when he was arrested during Mobarak’s regime for the charge of espionage with foreign intelligency against Egypt’s National Security. And that’s not a secret, because during Morsi’s period of ruling he did give a general pardon to many terrorists, not only those who were sentenced to life prison, but also to those who were facing death penalty for killing the tourists of Luxor and also Egyptian civilians and Police and military individuals during the 80’s and the 90’s in Egypt and also he gave a general pardon to some of the killers of Late President Sadat.

Of course Morsi used his authorities which was totally above all kinds of laws in Egypt by that time, when he had in hands full legislatives and executives authorities. And later on as well, according to the constitution his fellows Brotherhood set in order to serve their interests and not the Egyptian people’s interests.

That was the deal between Mohammed Morsi and Terrorists, he sets them free, and in return they be his Militias forces in order to use them whenever he and his Brotherhood thugs need against any Egyptian or any official institutions who criticize him or dare to participate in any kinds of protests against Brotherhood regime. 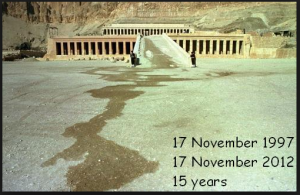 Now we all know the clear link between the Muslim brotherhood and EL Jihad group and El Qaeda organization and Islamist bloody extremists, those are the same terrorists Egyptians are fighting today.

How do all the families of the tourists victims feel right now? your beloved were shot to death and they were also tortured and you remember how did their bodies looked like then. The bad news is, the terrorists who killed your beloved ones were set free by Brotherhood and that was totally blessed by your governments. 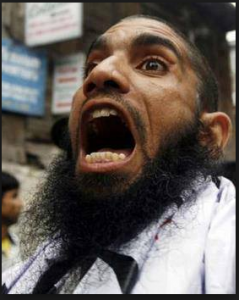 By the way, during Morsi’s period, we were screaming like we are screaming now when he gave a general pardon to the terrorists who killed your beloved. Not only that, but also Morsi had the guts to nominate and appointed one of those released terrorists leaders from jail, and made him the governor of Luxor city! That was the leader who announced before the massacre of your beloved, that shedding the blood of all tourists in Egypt is allowed, and he gave instructions to his Militia terrorists, to go ahead and slaughter the tourists in Egypt because they are Anti Islam.

I hope all of you realize now why Egyptians made the revolution of the 30th of June 2013, and how your governments are putting pressure on our government to release terrorists. We are fighting terrorism sponsored and supported by your countries. Please help us by spreading the word.

I’m asking all families of all Luxor massacre’s victims, please help Egyptians to live in peace and save our children lives.