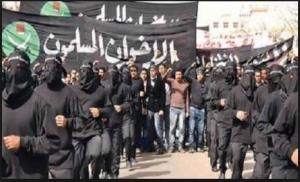 On 27 January 2016, Al-Bawaba news published names of 30 Muslim brotherhood elements, who joined terrorist camps in Libya and are trained to commit suicidal attacks in Egypt.

Al-Bawaba news revealed 30 names out of 100 from the Muslim brotherhood organization, who joined terrorist camps in Libya and Syria, especially the terrorist group called “Al-Morabetoun Al-Godod” a terrorist branch of Al-Qaeda organization in Libya, to prepare the MB elements to carry out suicidal attacks in Egypt.

The reports of the security services in Egypt revealed that these MB elements have joined the terrorist organizations in eastern Libya, to receive training among other armed militias.

The Security sources mentioned that Salah Mohamed Ashraf, a 38 years old Egyptian Muslim brotherhood member from Al-Mansoura city, traveled to Libya since one year and a half, is the person in charge of recruiting MB youth to join terrorist groups including financing and training them in Libya.

Muslim Brotherhood joined ISIS and Al-Qaeda terrorist camps in Eastern Libya, during the last 6 month and are trained on using weapons, making explosives and car bombs.

The same security sources revealed that Muslim Brotherhood managed to recruit these youth by establishing faked imports, exports and travelling companies under the cover of helping youth to travel abroad, while the purpose was to recruit them and get them into the Syrian and Libyan territories to join the most dangerous terrorist organizations in these countries, to commit suicidal and terror attacks in Egypt.

The security sources confirmed that the recruited Muslim Brotherhood youth are receiving 150 to 250 US$ per day in the terrorist camps in Libya. Among them some MB youth who studied in the engineering faculty of Al-Azhar university in Egypt, and others who participated in the MB Rabaa armed sit-in and also in the armed demonstrations of MB in areas like Haram, Mataryia in Egypt during the last period.

The security sources said that the terrorist camps in eastern Libya like in Misrata and Derna areas, the camps include hospitals field, in addition to training camps and foreign elements from different nationalities led by Egyptians, Syrians and Iraqis. The leader of these terrorist camps is an Egyptian called “Abu Taha“, he graduated from Al-Azhar university in 2009, and he traveled to Syria then to Libya in 2012, and he established a school to teach the explosive industry in the City of Derna in Libya and his assistant is a Muslim Brotherhood too.

The Egyptian security services revealed a list of 30 Muslim Brotherhood elements, and put them on the lists of high-risk terrorist elements and on the watch lists of seaports, airports, borders crossing. In addition to the publication and distribution of their names on all borders crossing of different security services. The security sources confirmed the tighten of security measures on the eastern borders of Sinai.

Names of the Muslim Brotherhood elements trained in terrorist camps in Eastern Libya are as follows: