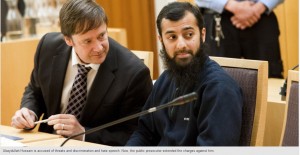 Norway on 16/1/2014, Islamist Ubaydullah Hussain facing multiple charges accused of having threatened and incited hateful speech against a person on Facebook who has emerged as gay.

Prosecuted for racism paragraph, Attorney Carl Fari, addressed charges against Hussain, says Facebook message affected by the so-called racism paragraph, Section 135 a.  In our opinion, the conditions to bring an indictment for this relationship by Penal Code Section 135 A, is fulfilled, says Fari.

The message is added to the basis of the criminal case against Hussain starting in late January, where he already is charged with intimidation and discrimination and hate speech.

Charged with threats and hate speech In the first indictment, which was known in November last year, Hussain addressed partly to assert a discriminatory and hateful speech against Jews in Norway. Remark was made on Facebook, and the district attorney also believes it is affected by racism clause.

Hussain commented on the charges that he believes he is protected by freedom of speech. The trial of Ubaydullah Hussain starts Monday 27 January 2014.

In the Norwegian penal code section 135 a, a  person who willfully or through gross negligence publicly utters a discriminatory or hateful expression shall be punished by a fine or imprisonment up to three years. As the expression is also considered the use of symbols. Complicity is punishable in the same manner.
A discriminatory or hateful expression means threatening or insulting someone, or promote hatred, persecution or contempt for someone because of their:
a) skin color or national or ethnic origin,
b) religion or belief,
c) gender orientation, lifestyle or orientation, or
d) disability.

Now, imagine if this Islamist was a part of an Extremist regime, he would apply his own law with his own hands, just like they do in Iran, and just like Muslim Brotherhood wanted to do in Egypt through their 2012 constitution!

Egyptians revolted against Muslim Brotherhood and are being attacked fiercely for applying the law against Extremists who were inciting for killing and hate speech 24 hours a day, like this Norwegian Islamist Extremist.

The Norwegian Islamist accused of inciting and hate speech against the gay person, thought that his statement was protected by freedom of speech in Norway! And this is typically the double standard that the International governments and human rights organizations are practicing against Egypt. If they face terror acts in their own homelands or hate speech, the law is applied against the offender or the attacker; But if the same happen in a country like Egypt, then they claim that Egypt is oppressing the freedom of speech!

Is there two definitions for hate speech and inciting for killing? Yes there is. In a country like Egypt, Foreign Governments and their Human rights Organizations and politicized medias support Muslim Brotherhood terrorists, defend their armed protests against the Egyptian community and refused to consider the Brothers organization as terrorist because they are not a threat to these countries yet!

Tell me please what did Obama’s administration do in relation to massacres against Christians in Egypt and churches burned, terror attacks against military and police individuals and against the Egyptian community by Muslim Brotherhood and their militias?! They do not call spade a spade! On the contrary, Us administration punished Egypt for revolting against Muslim Brothers and accusing the Government of freedom of speech oppression and smashing a terrorist organization!

Human rights organizations and foreign media don’t call spade a spade either! They also launch their fierce campaign against Egypt for fighting terrorism and extremism and they do support a terrorist Organization.

One Islamist in Norway is facing 3 years in jail for inciting killing against a gay person and no freedom of speech there for this extremist, but applying the law and protecting the lives of their own citizens and national security because it is Norway and not Egypt.

On the other hand, this same hypocrite world did not say a single condemning word to the Muslim Brotherhood regime when they were in power and were practicing killing and inciting for killing and hateful speech against anyone and everyone who was not a member in their terrorist camp.

Egyptian Islamist in 2013 Justifies His Assassination of Secularist Intellectual Farag Foda in 1992.

Clerics Express Joy over Murder of Four Shiites in Egypt and giving excuses for their killers.