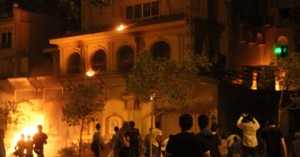 South Cairo prosecution, Counselor Tamer Al-Arabi And Ismail Hafez referred Mostafa Ahmed age 28 years old “Muslim Brotherhood Sniper” to the Criminal Court with the charge of killing 9 civilians and injured more than 10 civilians in Front of Muslim Brotherhood Main Building in Moqatam Area – Cairo during the events of the 30th of June 2013 Revolution.

The investigations of DA Prosecutor revealed that 250 gunmen are charged in the same case with the Sniper, were located on the top of the building shooting at civilians with machine guns and also are accused of electrifying the Building fence.

The sniper and the rest of Muslim brotherhood gunmen accused in that case were caught by the demonstrators after they ran out of ammunition.

This news is for those who claim the innocence and the safe exit to all Muslim Brotherhood Militia Criminals who are killing Egyptian Civilians every day.