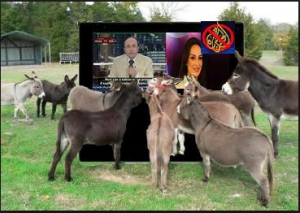 This is How Al-Jazeera Qatar official media channel works

Video of Muslim Brotherhood students caught while filming faked death scene to spread to the international Media. The video was filmed in Al-Azhar university, showing Brotherhood Students bodies supposed to be shot by the security forces. In the video, someone was saying what is this music sound, put some “Quran”, we also need water, cover the dead. One of the dead bodies was asking did they start filming? Are we done filming? Can they get up now, are we done? I can’t take my breath! Someone then said: No, don’t get up, stay there we are done yet. They are here, they are here, get ready!

The following two videos, Muslim Brotherhood and their supporters showing their victims and dead bodies, red color on the hands of one of the victims, that supposed to be Blood, playing dead and seriously injured. Last Video, is really a miracle!

Recorded and published by Aljazeera Qatar’s Official Media Channel. Brotherhood supporter shot by the Military and Police in his chest and stomach, and the scene was filmed in Rabaa square.

The video shows the Brotherhood victim dying, blood on his T-shirt, and totally in Comma. All of a sudden, when the cameraman was trying to lift his shirt to show the world his wounds, the dying man jumped and kicked the cameraman strongly with his feet!!! That was not the agreement of course with Aljazeera channel, it was just to film the dead body, but not to lift the t-shirt, the dying man, did not accept to let the camera man lift his T-shirt, and decided to wake up from death, kicked the Cameraman with his feet, then went back to death again!!!

After Brotherhood marketed the videos to the foreign medias, the dead bodies came back to life again and the seriously injured ones, stood up and laugh. This is how foreign Medias work and especially Al-Jazeera Qatari Channel, the big Ally of Brotherhood in spreading lies and forged news!!!

The following screenshot, dated 4/10/2013, Al-Jazeera is not really professional when it comes to faking news about Muslim Brotherhood demonstrations.

See the two circles in the screenshot, the one up mentioning Cairo city, the one down mentioning Port said city and the same protesters appear in the two screens! 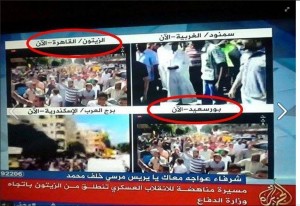 The following screenshot, is for a sisterhood, who is covered in a shroud, and she was supposed to be dead, as the brotherhood spread to the world, and right before Aljazeera films and report that the poor innocent girl was a victim of the Egyptian Military, Camera man decided to cheer her up while she was supposed to be dead in a few minutes, he was tickling her and she was laughing…Have you ever seen a dead body covered in shrouds  laughing before she playing dead?! 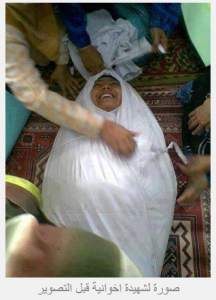 Here is another screenshot, Brotherhood insulting Military officers and provoked them, Brotherhood supporters raised their shoes to Military individuals and the officers response was, thank you so very much, peace upon you guys. That’s what Aljazeera doesn’t show! 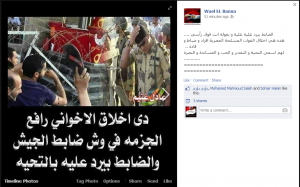 The following  is a similar video, except the place is different. Rebels in Syria, playing victims and dead of Assad’s Chemical weapons. The video shows dead bodies and victims after it has been merketed to the foreign medias, they were laughing and standing up after they were dead! “Freedom Fighters” as Obama Bin Lying described them, and those are the victims of “Al-Assad” Regime’s Chemical weapons. 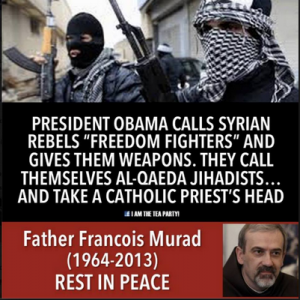