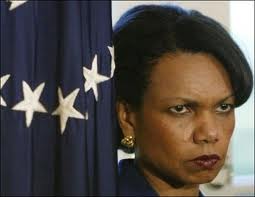 The Nato invasion and the Americans arrested Saddam Hussein and put him on a  farce trial court and slaughtered him in the first day of Moslems feast which was very deliberately humiliating), to tell all Arabs : The lesson has just started you stupid!

Muammar Gaddafi after the Nato Invasion was left to those who call themselves revolutionaries, to be tortured when he was dying and even after his death and the way they killed him was so barbaric, in order to tell the world, we do not do to you Arabs, more than what you are doing to your selves.

All my best wishes to the Arab World, while enjoying the Creative bloody Chaoes of Miss universe: condoleezza rice.