On the 6th of August 2013, Muslim Brotherhood March in Alexandria as the following video shows, The Brotherhood were marching in the streets carrying  knives, swords and weapons.

A brotherhood Guy wearing blue T-shirt carrying a gun and shooting randomly in the direction of civilians and the police who was using tear gas to disperse them. Then the video shows another brotherhood fellow carrying a sword walking, wearing a pink  T-shirt got shot by the Guy who carry the gun, then he ran away after shooting his colleague.

This is not the first time to see that scene in the brotherhood demonstrations and marching, they shoot at each other and then claim that the military or the police shot them. And as the video shows they are armed with different kinds of weapons 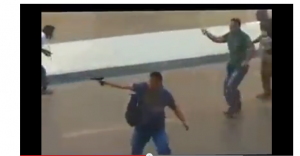