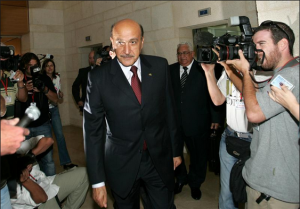 The documents contained terrifying and shocking secrets about events which took place since Obama’s first and last visit to Egypt on 4/6/2009. Mubarak   knew that it wasn’t a normal visit, but it was a message from the United States addressed to Mubarak regime to leave, and this was the start of the removal scenario.

Before Obama’s visit to Egypt, Omar Suleiman provided a classified detailed report  to Mubarak revealed the big conspiracy threads against Egypt which included Foreign Intelligence elements who represented major countries in the world who cooperated and coordinated with Muslim Brotherhood Organization to overthrow Mubarak and take over the power of the state.

After Obama’s visit to Egypt, Mubarak has totally given up on The idea of ​​his son’s inheritance of power in Egypt, and he also made a full perception of his retirement idea. In addition, he decided to assign Omar Suleiman as his deputy.

Muslim Brotherhood were scared from all what Omar Suleiman knew about them and they knew for definite that if Omar Suleiman reveals the content of his black box to the Egyptian people, this would definitely be the end of  the beginning in relation to Brotherhood organization.

But Omar Suleiman talked a lot during the 25th of Jan 2011 period and announced publicly a lot of information which were sending warning messages to Egyptians about the current and future serious dangers surrounded Egypt from the inside and the outside at this period. But unfortunately, no body listened to his warnings.

Every Egyptian has the right now to know the truth about what really happened at this 25th of Jan period. This is the right time that every Egyptian and to whom it may concern to learn about the most dangerous classified intelligence information of the black box of the Mysterious Intelligence Former Chief Omar Suleiman.

The documents are composed of 6 parts as follows:

Part 2 The details of Muslim Brotherhood Organization agreement with the American CIA on Brotherhood taking over the power in Egypt, just few months before the 25th of January 2011.

Part 4 Obama gives the green light for the operation ” The Egyptian Swamp “.

Part 5  US AFRICOM Task to attack Egypt under the banner and the cover of ” Protected Areas “.

Part 6 The Last Chance for the Survival Of The Egyptian State.

Click here to read The English Translation of the Black Box Of The Egyptian Intelligence Chief Omar Suleiman.